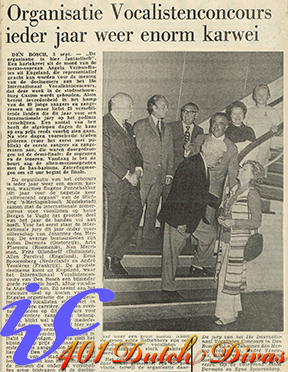 An interesting article by an anonymous journalist focused on the 18th IVC as such, and the background of one specific candidate, rather than on the semi-finals and so on. In this case, the soprano chosen was Angela Vernon-Bates, who praised the organization of the event. The critic further noted that she wasn’t alone in her opinion. More interesting than these perhaps somewhat gratuitous words of praise were his observations on the 18 TH IVC and the background and prospects of Miss. Vernon-Bates.

To begin with, we read here that chairman Eugène Pannebakker is busy with the organization of the IVC and the Summer courses in Vught all around the year. The largest contingent of candidates comes from the UK, where, said Vernon-Bates, the IVC has a fine reputation:

‘She participates in the competition on a grant from an English organization that stimulates talented young singers in pursuing a career. Just how important the IVC is to her, becomes clear when she tells that winning a Prize in Den Bosch would gain her a stipendium to complete her studies in Italy. Angela is also very happy with the hospitality of the people, who provided lodging and show her around the town. The contact with local people also helps to ease nerves and stress.’

Eugène Pannebakker on the financial details

From Eugène Pannebakker we learn that the audiences for the competition are composed of regular enthusiasts, as well as of vocal teachers and other singers. Pannebakker also answers question with respect to the financial back-up of the festival, which is subsidized by City, province, and National Government. In addition, the organizations also receives a fee from the KRO for the recording of the concluding Gala Concerts.