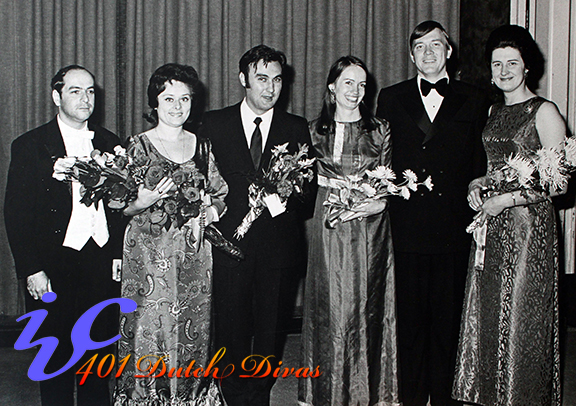 A low number of 67 singers arrived to Den Bosch for the 19th International Vocal Competition (IVC), which was held from September 2 until September 9, 1972. Among the participants were 34 sopranos, 14 altos/mezzo-sopranos, 6 tenors, and 22 basses/baritones. The division per country showed the UK on top with 12 participants, followed by Germany (10), The Netherlands (9), USA (6), Romania and Japan (5), France (4), Belgium, Bulgaria, Poland and Switserland (3), Canada, Czechoslovakia and Finland (2), and China, Cuba, East Germany, Ireland, New Zeeland, Austria and Sweden (1). A total of 39 candidates made it to the semi finals, of which 12 passed on to the finals. From the 9 Dutch participants only 2 passed on to the semi finals, Jacqueline Jacobs and Germaine Stordiau.

By mutual consent of Jury and press, the average level of the 1972 candidates was not particularly high, while some considered the 30+ average age of the semi finalists ‘exceptionally high,’ against an age limit of 32. The President of the Jury Johannes den Hertog asked himself what these singers had been up to previously, whereas Jury member Kim Borg exclaimed that a singer of that age should have been well into his early career rather than to be looking for a first break. Another point noted was the continuing absence of participants from Italy, which since some years had ceased to send participants. Even so, a local paper noted that since the start in 1954, over 1.500 young singers had traveled to Den Bosch, to try their luck. If most failed, those who succeeded and made a career carried on the name of the competition and Den Bosch around the globe, making the IVC a very strong promotional instrument for the city; perhaps even much more so, than had originally been expected