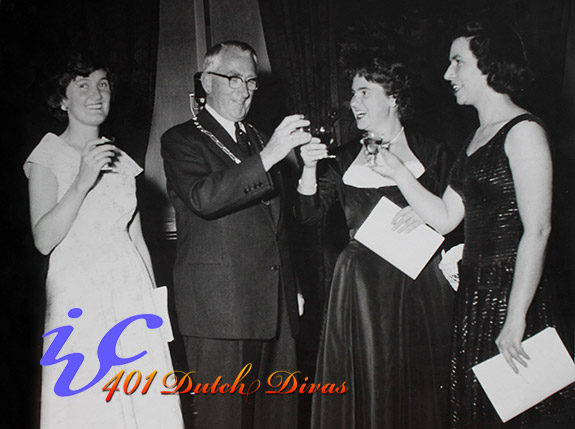 Before the decision was made to organize the third edition of the International Vocal Competition Den Bosch, there was a critical evaluation of aims, achievements and prospects. These are best understood from the board meeting on December 8, 1955, which had the following two agenda points:

The evaluation starts with an analysis of the 'disappointing' results of the 1955 competition when set off against the spectacular results of the first competition in 1954, which had produced the likes of Annette de la Bije and Hans Wilbrink, who were already established singers by 1955. Especially in the beginning of the IVC, the need to 'score' immediately was felt by the organization, mostly as a result of the spectacular results of the very first competition. The organization understood this, saying that such talents aren't found every day, whereas they argued among themselves that the average level of participants had not been less than in the first year. Nonetheless, they were looking for ways to lend fate a helping hand, in order to have more control over the outcome of each competition – especially with respect to Dutch participants, wrote secretary J. Coopmans:

'Most disappointing was to see no Dutch singer win a first prize. Wouter Paap is right when saying that we should ask ourselves how it is possible that none of the young talents, who are now starting their career in oratorio, song, or opera, have participated in our competition. The contesters were mostly beginners without any experience, whereas Paap argues that the competition should recruit singers who are a little further in their development, and already performing here and there.'

Supported by conductor Hein Jordans, Coopmans argues that it would be a mistake to postpone the third competition to 1957, since the IVC had to continue to build it's reputation rather than to interrupt the process. Hein Jordans wrote:

'In my opinion you have done very well. When young artists as Annette de la Bije and Hans Wilbrink can make such spectacular careers overnight, this is because they won the first prize here. Moreover, those interested can now hear young artists. Those who fail can also no longer claim that they have no options to present themselves.'

Jury member Roy Henderson and Jan Wisse from Elsevier Magazine, apparently representing 'the press', left further testimonies to the value of the competition and stressed that it should be continued annually.

Subsequently it was decided to continue the competition also in 1956, with some significant changes in the program. The pre selection would no longer be open to the public; trials were not longer in the morning and afternoon, but shifted to afternoon and evening; the jury would be the same throughout the competition; there would be more time between competition and final concert so that the participants would have more time to rehearse.

In addition, the Third edition of the International Vocal Competition Den Bosch, held from 18 to 20 September 1956, aimed to further expand the international ambitions, by recruiting more foreign participants. None less a jury member than English baritone Roy Henderson, the teacher of Kathleen Ferrier, had suggested to the organization that they raise the prize money to ƒ 700 each for first prize winners (eventually raised to ƒ 1000), and ƒ 300 for second prize winners (eventually raised to ƒ 500). In addition all semi-finalists received a diploma, and the jury had the right to award medals to non prize winners that did have something going for them even though they weren't ready for the finals yet – an encouragement prize.

In order to recruit more foreign singers, jury members were asked to provide details with respect to Vocalist Unions in their respective countries. Specifically, Roy Henderson was asked for the whereabouts of the Union of Vocalists in Great Britain. The IVC organization then contacted these unions, asking for lists with young singers (up and to 35 years of age) from the respective countries, in order to point them a prospectus of the competition. In between the lines Henderson was sort of invited to lend a helping hand:

'I should value it very highly, if Great Britain would be properly represented at the festival this year.

In terms of promotion and exploitation, the organizing committee of Muziekstad 's Hertogenbosch had arranged for a series of final concert recording to be released by Philips. This involved some wheeling and dealing with Philips, represented by the label's mother company Phonogram.

For this year we also have financial ledgers. These show that the Brabant orchestra was paid ƒ 700 for the final concert excluding gramophone-publishing rights. International jury members like Gerhard Hüsch members received ƒ 900 including travel expenses.