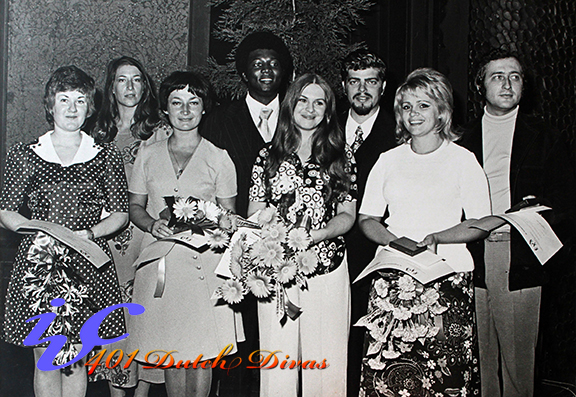 ‘Do you want the International Vocal Competition to continue?? Many of our subventions have been diminished or eliminated because of numerous budget cuts. If you want us to continue, then support us with either ƒ 25, ƒ 50, or ƒ 100.’

The International Vocal Competition Den Bosch had started nine years after World War II, in a time of great optimism, due to near explosive economic growth. The Dutch Government began building a social infrastructure that had no match in history, unless perhaps if one included tribal societies where money played no role. At the end of the 1960’s, though, global economy looked very different. The economic boom made Western countries depend more and more on oil, within a dollar based global economy. By the end of the 1960’s, the dollar started devaluating, and by 1973 the oil producing Arab countries started an oil boycott against countries that had supported Israel in the Jom Kippur War. The impact on the economies of the United States and The Netherlands was enormous. The first sector to feel the effects was the cultural sector, with both National, as well as Provincial and local subventions being abolished or cut. Therefore, the 20th IVC in 1973 constitutes a clear turning point in the history of the competition. From the careless years where Mayor Loeff and the organizing Foundation ‘Muziekstad Den Bosch’ arranged the financial details between themselves over cozy dinners, the IVC entered a period where relations with the political and financial powers of City and Province became more formal. In the words of Hein Zomerdijk, the IVC had been a marvelous promotional event for City and Province, even for the Country as such. Even so, there was a significant price to be paid for advancing fantastic young singers’ careers and securing high caliber Juries such as the current one, with the likes of Gino Bechi, Gré Brouwenstein, Lore Fischer, Arta Florescu, Leonce Gras, John Kentisch and Bernard Kruysen, under, once again, President Manus Willemsen. For the first time in it’s history, the IVC faced financial problems that threatened the future of the competition as such.

Following last year’s concerns about the 30+ average ages of finalists, the organization had lowered the maximum age of admittance to 31 years, and contemplated lowering it to 30 years in the imminent future. In conversation with the Press (another attempt to create more understanding between press and Jury), the Jury proved divided. While a number of Jury members believed that singers weren’t likely to make much more progress above 30, Gré van Swol Brouwenstijn argued that an opera singer reached his full potential only after the age of 40. Perhaps the voice was at it most fresh between 30 and 40, but the maturity to impersonate all these different characters required a more ripe age. In retrospect, there is perhaps no rule for all, other than that logic dictates that singers with a higher average age naturally will have more experience and therefore winners often weren’t the youngest contesters in the competitions.

Most peculiarly, the age limit was lowered following Kim Borg’s argument in the 1972 IVC that singers of 30+ should already be in their careers rather than looking for a break into it. While this may be a valid theory in general, this completely bypasses the policy of the IVC since 1956, when the aim was to recruit singers who already had an emerging career so as to secure both a higher level among participants, and to come out with more winners who would have a future career. In the case of the 19th IVC, nearly all winners were well into their careers, especially the Romanian ones. As a result, Gerda Spireanu, Gheorge Emil Crăsnaru, Robert Currier Christesen, Jacques Bona and Marcel Vanaud all achieved fine careers, while Patricia Payne and Eduard Tumageanian achieved important international careers; tenors Moisés Parker and Jeffrey Tate even proved the Jury wrong by achieving fine careers even though they didn’t win anything in 1972.

{LINK BLUE BELOW TO EMPTY DD PAGES MAKE THEM IF YOU DIDN”T YET DO SO, THEY WILL COME BACK MANY TIMES IN THESE PAGES}

Out of 84 participants at the 20th IVC 1973, only one First Prize winner emerged, Hungarian soprano Adrienne Csengery, who also proved to be the only singer of this year’s competition to make a great international career. Second Prize winners Miriam Bowen, Cornelia Pop, Stefania Toczyska, Antonius Nicolescu, James Wagner and Summer Course Scholarship Winner Jozef Baert all achieved fine careers in their respective countries. With seven fine careers out of 84 participants whose average level was dubbed by the press as ‘exceptionally low,’ the result in the long run proved to be at about the same as in years with an ‘exceptionally high’ average level, excluding only a few years in the mid 1960’s when even stunning numbers of non winning participants achieved impressive careers. I will not ponder on the psychology of the Dutch as a Nation when it comes to their achievements in classical music, but I do wish to point out that the most prestigious vocal competitions in the world would not only have been content with such figures, the IVC actually ranked among those.

The role of the IVC in the Musical World of 1973

Perhaps other competitions in the center of the musical world, say those in Munich, Barcelona, were slightly more realistic about their actual position within the world of music. As Secretary Eugène Pannebakker admitted to me in interview, the IVC had international standing while in The Netherlands it had remained a very provincial event, especially in terms of organization. The IVC had started as a one-time event that was prolonged due to its unexpected, overwhelming success. The organization was never professionalized, but remained a split effort where the City Council freed some clerks who were already on their payroll to support the organization of the ‘Muziekstad’ Foundation. This had been the case in 1954, and this was sill the case in 1973. The discussion on policies and rules and so on, reflected a limited understanding of how the IVC actually functioned within the world of international music, where singers simply made the rounds of all possible vocal competitions. They tried their luck in Europe and the USA for three, four, sometimes even five years in a row. If they won a First Prize here, there was another prize to win elsewhere, and with it came ever more international contacts in terms of agents, conductors or theatre managements. Therefore, from the late 1950’s onwards, the names of IVC winners are increasingly also the names of the winners in the other important competitions. The same goes for the international Jury members. The International prestige of the IVC in the 1970’s is perhaps best measured not in terms of it’s winners, but in terms of ‘house’ Jury members such as Manus Willemsen being invited to other international Jury’s, and by the fact that even the greatest Prize Winners never failed to mention their IVC Prize in their career resumes.