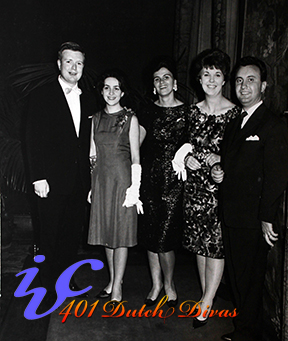 After years determined by looking for ways to secure the future of the IVC, the various experiments with bringing the Jury on a par with Verviers, Geneva, Munich and elsewhere, and making the competition more attractive to aspiring singers for abroad, the hard labor finally culminated in the undisputed triumph of the 12TH IVC in September 1965. With Viorica Cortez, Ileana Cotrubaș, Sigmund Nimsgern, an unexpected triumvirate of soon to be world famous singers was discovered.

The 12T IVC Den Bosch had attrackted no less than 90 competing singers, 28 sopranos, 14 alt-mezzos, 28 basses/baritones, and 20 tenors from Australia, Belgium, Bulgaria, Chine, Cuba, Germany, United Kingdom, France, Hungary, Israel, Italy, Yugoslavia, Luxemburg, The Netherlands, Poland, Romania, Schotland and Swiss republic. The competition took place from September 6 to 11, with the semi finals on the 9th and 10th, and the finals on the 11th.

The triumph of the East European vocal school

The results, with one German and three Romanian winners and former Second Prize winner Julijana Anastasijević from Yugoslavia being rewarded with an honorary diploma, confirmed the trend of recent years, where East-European singers started dominating the competition’s results. This is a big compliment to the outstanding vocal schools in Romania, Yugoslavia and other East-European nations. They would increasingly manifest themselves, spurred on by totalitarian governments that had discovered culture as a way to promote themselves in the West, besides the Olympic Games. By the early 1960’s, these singers also started spreading out over the operatic world, discovered by such talent scouts as Roberto Bauer for The Metropolitan Opera, New York, where a significant number of vocalists from Romanian (Nicolae Herlea, Virginia Zeani, Elena Cernei, and from 1971 onwards also also IVC winners Viorica Cortez and Ileana Cotrubaș), Yugoslavians (such as Zinka Milanov, Biserka Cvejić), Russian (such as Galina Vishnevskaya), Czech (such as Ludmila Dvoráková), and Bulgaria (such as Ljuba Welitsch, Dimiter Uzunov, and Nicolai Ghiaurov) were active in these years.

In addition to the soon to become World Stars Cortez, Cotrubaș and Nimsgern, the Romanian Second Prize winner Pompeiu Hărăşteanu would enjoy a fine career in his native country. With that, the 1965 edition of the IVC proved a turning point toward the future of the competiton as an established institute. Perhaps the greatest compliment to the organization was paid by a local corresondent of the Den Bosch DailyNews, who summarized the 11 previous years as a testimony of wise government, during which they had never succumbed to the temptation to hand out prizes lightly, merely for the ske of having quantity:

‘Not only have they served the interests of the competition well – since that can only succeed when a high level is guarnteed – but also they have done justice to the participants by mainting such high standards. A rejected participant can fare better with a rejection that is accompanied by some positive input with respect to points that should be strengthened rather than with an early reward which is not wholly earned.’

Finally, Dutch critic Gerard Verlinden noted that the festive atmosphere during the final round in the Casino Theatre was in no small amount caused by the discovery that the Casino suddenly boasted a stage of sorts, that seemed to have escaped the Munich Cuvilliés Theatre: ‘Cozy, resounding, and greatly enhancing the atmosphere.’ In short, President of the Jury Manus Willemsen had an easy task when he proclaimed the winners with true showmanship that one had become accustomed to by now:

‘He labeled this year’s competition as one of outstanding quality among participants. The audience was complimented for their loud participation in the selection, which was a vote for their part. Finally, he addressed the young talents, urging them to forget their prizes and continue to work hard and harder, so that the high expectations of the audiences around the Globe would eventually be wholly met.’ (Johan van Dongen, Eindhovens Dagblad, September 13, 1965)