1971 THE PRESS ON THE VOCAL COMPETITION 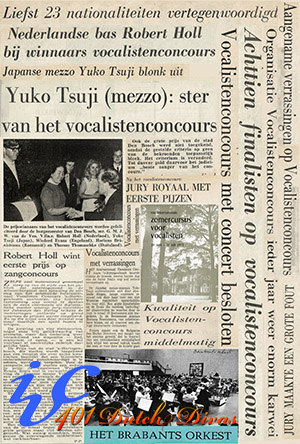 It is hard to say if the Juries had improved, if the candidates were better, or if the time had changed to the point that the press once again regarded the IVC as a wonderful event promoting aspiring young singers who deserved a little credit and sympathy. Still, since there is hardly a change in statistics with respect to winners making a career of sorts, we believe that the latter suggestion may well apply.

With the spirit of revolution against the establishment giving way to the mellowness of the 1970s, even Leo Hanekroot started writing ‘near positive’ essays on the IVC. Instead of ridiculing the new rule for winning the Great Prize of the City of Den Bosch for the best Singer of the Competition, he came up with a few well-wrought lines that put things in perspective:

‘The First Prize Winner who scores significantly more point than another still gets to win the Great Prize of the City of Den Bosch, but is no longer automatically also ‘Best Singer of the Competition. The difference must be seen in the Juries aim for objectivity. This new criterion is more reliable and alluring. You can also never prove them wrong, since how could you ever ‘prove’ that Yuko Tsuji was the best singer of the competition? You can’t prove that, but I am sure that there was no one in the audience who would have objected had she been pronounced Best Singer of the Competition. And therefore we brought her standing ovations, in fact, hurricanes of applause after her performance. That is and has always been how ‘best singers’ get elected. Who cares about the points, if the singer captivates the hearts of the audience! We, the simple folks in the audience – including the Jury – know that better than anyone.’ (Leo Hanekroot, Brabants Dagblad, September 1971)

Contrary to his usual ways, Hanekroot now found almost ‘poetic’ words to vent his sadness over the Jury failing to acknowledge one his favorites, in this case Bulgarian bass Stefan Dimitrow (1939-2004):

‘ Painful was the rejection of the Bulgarian heroic bass Stefan Dimitrow, who was cast aside by the Jury as if he was good for nothing. His voice type is already rare enough, apart from the fact that he sang exceedingly musical. Nonetheless, I was already surprised to see him in the finals, which must have cost the Jury some effort, since the owners of such glamorous power voices are usually cast away as if they were chimneysweepers. Robbed of his illusion, Dimitrow returned to the east, where he shall have plenty of room to move. How many despised talents have I seen walking the streets of Den Bosch in misery, over the years. Alas, that is the other side o the coin called glory.’ (Leo Hanekroot, Brabants Dagblad, September 1971)

It should be pointed out that Hanekroot was not the only journalist who though Dimitrow an imposing candidate. P.P. in an unknown newspaper clipping wrote of him that he impressed:

‘Even though this style is one dimensional, it is so imposing that you can’t help submitting to it.’

In NRC, Chris de Jong-Stolle wholly agreed, and wondered why the Jury had even let him pass to the finals, since it was clear that his robust stylistic features would not suddenly change there in any way. In fact, De Jong-Stolle thought he as already ‘a class of his own,’ and so many positive remarks about one singer naturally make us curious to his voice. Another journalist wrote that this outstanding Bulgarian bass did not only excel in arias by Borodin and Gounod, but that he also gave idiomatic renditions of Händel. Hanekroot had previously written of that Gounod performance in Gounod’s Mefistofele, that Dimitrov was a voice such as East-Europe could produce ever once in a while:

‘In ‘Le veau d’or’ he resembled a singing bear – singing, not belting – and he almost made you believe Gounod had written some brilliant music in Faust.’

Dimitrow subsequently achieved a fine career with a focus in the National Opera of Sofia, and an international extension. He appeared often in De Munt, Brussels, among others in preserved broadcasts of Capellio in Bellini’s I Capuleti e I Montechi (1986), as well as telecasts of Ferrando in Il trovatore (1984), and Nikitisch in Boris Godunov (1986). His celebrated roles included the title role in Boris Godunov, Don Basilio in Il Barbiere di Siviglia, the Grand Inquisitor in Don Carlo, Prince Galitzki and Khan Konchak in Prince Igor, Sparafucile in Rigoletto and Sarastro in Die Zauberflöte.

Another unidentified journalist thought it a pity that the Japanese soprano Takako Iwata didn’t at least return to Japan with an Honorary Diploma, which he had wished for her on the grounds of her Bellini and Verdi interpretations. But apart from that, the press unanimously thought the Jury had given the prizes to those who deserved them most. Little to nothing was specified in the press with respect to the other non-Prize winning finalists, tenors Neil Jenkins and Ryushi Kawase, soprano Christina Clark, and bass Noble Mircea Moisa, Rainer Buese, and mezzos Lyn Vernon and Patrica Taylor.

Another unidentified journalist noted that among 11 Dutch participants, three made it to semi finals, and two of them, Robert Holl, and Marie Louise Ages from Rijswijk, to the finals. Holl would eventually win a First Prize, Ages stranded in the finals, but the critic had some nice words for her beautiful timbre and her solid technique. She merely lacked interpretative skills, which could and would be trained, since she later entered into a long-term engagement with the Staatstheater Lübeck in Germany. Post career she became a teacher at the local music school.

Another journalist had wished for semi finalists Isin Güyer from Turkey, and the English sopranos Ann Price and Angela Vernon-Bates (see reminiscences), to at least be accepted into the finals. Hanekroot agreed about Güyer:

‘A magnificent mezzo, and a great opera singer in her vocal range.’

He had more words of praise reserved for ‘the formidable Romanian bass Mircea Moisa’, and for the West-German baritone Rainer Buese, who eclipsed all with Strauss’ ‘Traum durch die Dämmerung.’