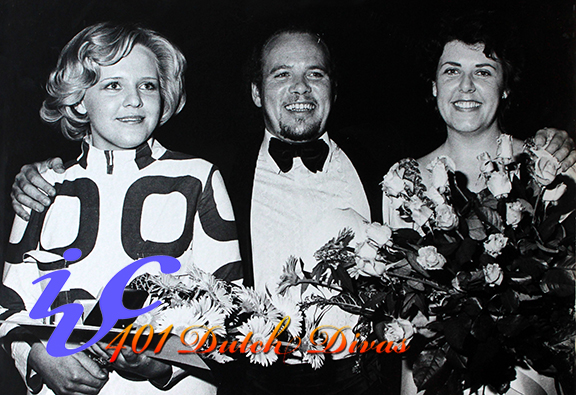 No less than 94 participants had enlisted for the 24d International Vocal Competition (IVC) Den Bosch, 1977. The competition was held from Saturday, September 3 until Wednesday the 14th, now again in the City Theatre Casino, which had just been reopened post years of renovation!

Expected where 40 sopranos, 29 alt/mezzos, 4 countertenors (of which none survived the preliminary rounds), 5 tenors and 16 bass/baritones, comprised of 24 nationalities. Once again, the East European countries were near absent, with just 4 Polish, 3 Yugoslavians, 2 Czechoslovakians and East Germans, and 1 each from Romania and Hungaria. Hein Zomerdijk looked in to the motives behind their absence in Brabants Dagblad, and concluded that these candidates were mostly obliged to present themselves as part of an official group, which the relied on the whims of government officials (visa problems have been a major reason behind the last minute absence of candidates, and even jurors).

Such problems did not exist in the UK, which sent a record of 19 candidates, among them two singing sisters Patricia and Doreen O’Neill! In addition, the USA sent a record of 15 candidates. Germany send 13, France 9, and Japan a ground breaking 7 candidates, which is clearly a result of the recent triumphs by the likes of Schuichi Takahashi (1970), Yuko Tsuji (1971), and Mitsuko Shirai (1976). Australia had 3 participants, 2 each came from Finland, Belgium, Switserland, Denmark and Korea. Finally, one participant each came from Canada, Norway, Luxembourg, and South Africa; in addition, the competition welcomed its first Nigerian candidate ever! Of The Netherlands only 4 candidates arrived to Den Bosch, confirming the tradition of local talent that shunned the game, for fear of over exposure at the home market in case of a negative result. By word of Hein Zomerdijk, Brabants Dagblad had some understanding for these fears, although the critic preferred to look at it from the opposite side of the specter, saying that a victory in Den Bosch almost automatically resulted in a sound National career. Indeed, even though only one of the 4 Dutch participants (Joke de Vin) made it to the semi finals, the others remained anonymous, so what could there possibly be to fear? Another novum apart from the Nigerian candidate were the two singing sisters from England, both surviving the preliminary rounds.

The new Casino Theatre hall was constructed with state of the art elements and novelties, including ‘flexible acoustics,’ which was possible due to an adjustable sound screen in front of the auditorium that could be set to various positions. Another novelty was flexible curtains that rolled up in the roof of the auditorium rather than to the sides.

If last year’s kermes with brass band inspired the novelty of an opening concert or not, the 24th edition of the IVC did indeed open with a concert by the Royal Harmony of Den Bosch at 2 PM, which signaled the beginning of the preliminary rounds, which lasted till Tuesday September 6. Wednesday the 7th, the competitors, Jury and organization had a sightseeing tour through the city ahead of them, whilst Thursday morning the 7th featured the Press conference in the Golden Tulip Hotel, where Jury and journalists could talk with each other. That same Thursday the 7 th, at 2 PM, the public semi finals started. These would last until the 9th. The finals were held at Saturday the 10th, starting from 11 AM. At 7 PM the final results would be announced by Mayor G van der Ven. The 24th IVC would conclude on September 14, with the habitual Gala Concert of First and Second Prize winners, accompanied from the Brabants Orkest conducted by André Rieu Sr.