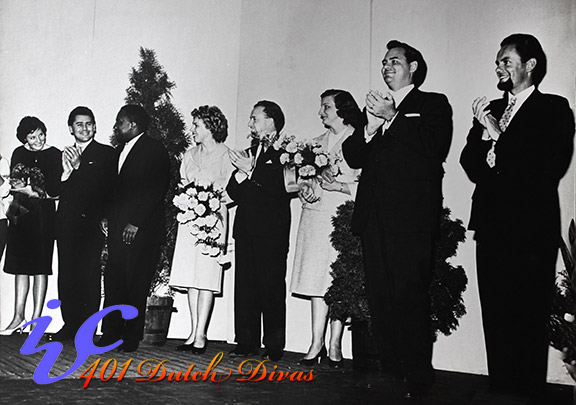 The 1961 edition of the International Vocal Competition den Bosch (IVC) drew significantly less participants to Den Bosch. Against 1960’s record 101 contesters, there were now just 70 participants, 63 of which actually arrived to Den Bosch. By general consensus bar some (see press section), the level of semi finals and finals was far above average. This is indeed reflected in the outcome, which produced such international celebrities as Yvonne Minton and the American Negro baritone Thomas Carey. On the next level we mention the likes of 2nd Prizewinners Olga Maddalena, Alphonz Bartha, Kenneth John Bowen, Henk Smit, and Karin Ostar who over the next decade(s) belonged to the vocal top in their respective countries of origin.

Essentially, it is the 1961 competition that stands at the basis of today’s tradition to sing a song by a Dutch composer. This was achieved through the collaboration with Donemus, the Dutch Composers Association, who had notified the participants in advance that singing a Dutch song among the song selection would be highly appreciated. Thus a remarkable number of singers, also from abroad, arrived with a song by composers as varied as Diepenbrock to Badings on their repertoire of choice. To ensure a better understanding of Dutch composers, Donemus had also created an exhibition in Youth House De Kolk, which was one of the rehearsal venues. A surprising number of foreign singers came there to study the subject. 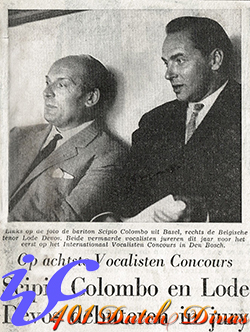 With respect to the Jury, one paper noted that they seemed to emphasis the presence of a vocal personality, and style, both of which had to be linked with the overall vocal achievement. This would become manifest in the final results, with once again a winner whose style and interpretation was decisive, against the predictable favorites of the audiences and the press in these years, which were those candidates with the bigger, dramatic voices. New in the jury were Italian baritone Scipio Colombo, and tenor Lode Devos. Scipio Colombo was both World famous and celebrated in The Netherlands, where he achieved notable success with a few celebrated guest performances. Colombo on his IVC task:

‘The most important criteria are a well-schooled voice and musicality. Yet, a Jury member should not only listen with his ears, but also with his heart. If not, the human being behind the artist is in danger. These singers are sensitive to so much external factors. Nerves can make a big difference.’

Belgian tenor Lode Devos had achieved his career largely in The Netherlands, debuting there in 1953, in Henk Bading’s opera Orestes. At the time of writing, Devos was still in the middle of his concert and oratorio career, and shortly before his upcoming Het Concertgebouw recitals in Amsterdam. Part from being a tenor, he also led the ensemble Musica Polyfonica, which was presumably the main reason for his election into the Jury.