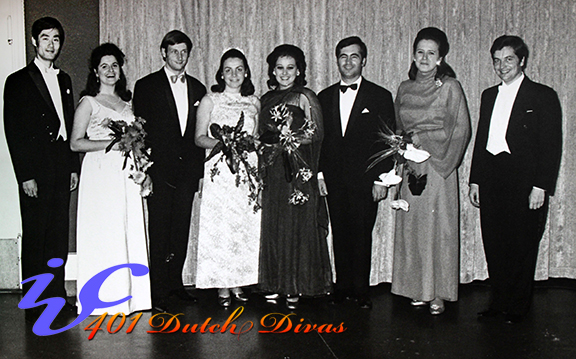 Out of 117 enlistings, 105 participants arrived to Den Bosch for the 17th edition of the International Vocal Competition (IVC). A novum were the record number of singers that made it to the semi-finals: 20 sopranos, 6 tenors, 14 bassos/baritones and 6 altos/mezzos. Also new was that any given candidate had to score a 7,5 average by at least 5 of the 7 members of the Jury, in order to pass to the finals. Achievements made during the preliminary round no longer weighed in later rounds. On top of that, the motives of the Jury would be made public, rather than left in the dark. The latter policy may well have helped in gaining an unusually favorable press.

The reason for the formal decision to refrain from taking previous achievements into account, was a further attempt to make the Jury’s decisions more understandable in the eyes of audience and critics, who had no knowledge of any given candidate’s achievements in the preliminary rounds. Admittedly, some benefitted from this system, while others thrived less well by it, but either system has its pros and cons. For the organization of the IVC, the decision was certainly a wise one. It was not only well received by the press, but it also resulted in much more understanding for the Jury’s verdict, both by audience and press alike.

Parts of the inventory were accompanists Gérard van Blerk and George van Renesse. They had been the regular accompanists at the competition for 17 years in a row, with George traditionally accompanying the sopranos, and Gérard favoring the lower voice categories. Van Blerk was depicted as the ever-laughing man from Tilburg, who took his task behind the piano very serious. Van Renesse was depicted as the aging gentleman who was known for his special manner of finishing performances by slowly closing the score with his left hand. During the 1970 semi finals he gave that notion a special twist, when a strong draft forced him to keep the pages of the score of ‘Rejoice greatly’ in place with one hand, while playing the accompaniment one handed. Depending on which page needed to be secured, he played either right or left handed, after which he notified the jury that there were ‘special circumstances’ to be taken in account with this performance.

In addition, Brabants Dagblad pointed to the fact that many visitors were in fact members of hosting families, who provided free lodgings for participants, sometimes hosting up to three at a time.