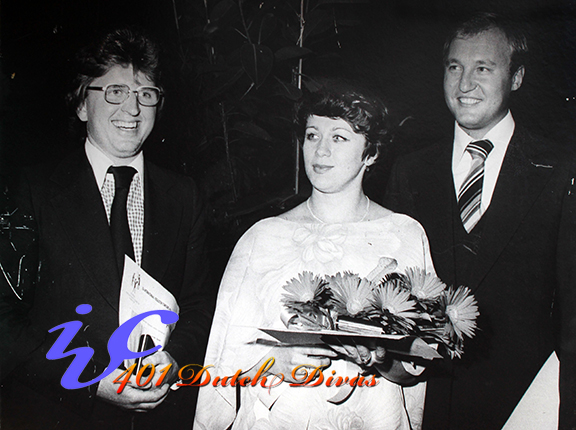 The 25th edition of the International Vocal Competition (IVC) Den Bosch 1978 called for retrospects, celebrations, a special edition, a jubilee book and… the first IVC vinyl release since the two problematic 7” single recordings of 1956 winners Edna Graham, Halina Łukomska and Elly Ameling. There were speculations in the press that the 25th anniversary might also mark the end of the IVC, but there rumors were false.

The 25th IVC was held from August 26 until September 2, with the Gala Concert of the winners on September 6. On Sunday September 3, the silver jubilee was celebrated with a gathering at the City Hall of Den Bosch, and then on September 14 and 16 with two performances of Così fan tutte, performed by former IVC winners. In total, a round number of 100 participants had registered, of which 91 ultimately arrived to the preliminary rounds, divided among 23 nationalities. The IVC was to be opened on Saturday, August 26, at 2 PM by the Royal Harmony Den Bosch at the Parade, following which the preliminary rounds should have started. At the last hour, the opening concert was canceled because the kermes that was simultaneously held at parade Square produced too much noise that the Harmony felt it inappropriate for them to perform under those circumstances. Thus, the preliminaries opened without any ceremony, lasting until Tuesday, August 29. The semi finals were held on Thursday August 31, and Friday, September 1. On Saturday, September 2, the finals started at 11 PM. 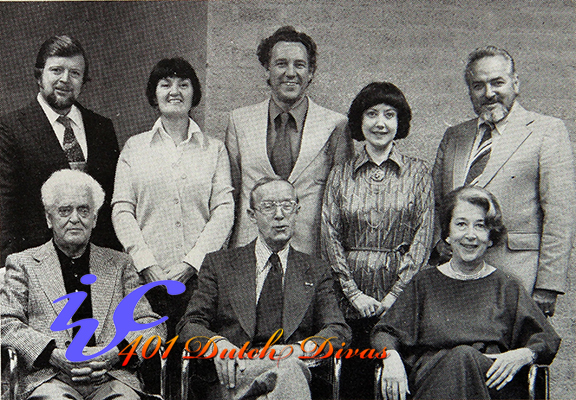 Remarkable in the Jury was that it was largely made up of former IVC winners, beginning with Eva Bornemann (1955), Halina Łukomska (1956), Bernard Kruysen (1958), and Sigmund Nimsgern (1969). Planned was also 1956 IVC winner Viorica Cortez, but, due to unknown reasons (visa problems or otherwise) the now World famous Romanian mezzo soprano she couldn’t make it to Den Bosch. Jurors Anton Dermota and Lode Devos were among the core jurors of the last decade, whereas, naturally, Manus Willemsen, on and off present there since the very first competition in 1954, presided the jubilee Jury. The only ‘newcomer’ was Dorothy Dorow, who had impressed with her coaching of the students at the Summer Course in Vught the year before. Accompanists were Gérard van Blerk and Rudolf Jansen. 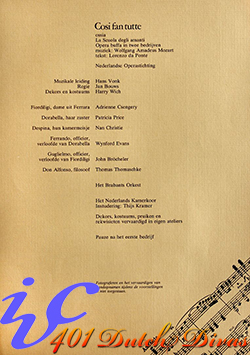 The jubilee performances of Mozart’s Così fan tutte in the Casino Teatre Den Bosch had the IVC house orchestra Het Brabants Orkest, not conducted by André Rieu Sr., but by Hans Vonk, because this was a performance of the Dutch Opera Foundation, initiated and sponsored by the Casino Theatre direction as a jubilee present to the City on the grounds of it’s own 150 years jubilee. The soloists were Adrienne Csengery (1st prize 1973, Fiordiligi), Patricia Price (1st prize 1975, Dorabella), Thomas Thomaschke (1st prize 1971, Don Alfonso), Wynford Evans (2nd prize 1972, Ferrando), John Bröcheler (Toonkunst Prize 1969, Guglielmo), Nan Christie (Finalist 1971, Despina). The performances in Den Bosch were the starting point of a cross-country tour that would visit also Tilburg, Rotterdam, Amsterdam, Eindhoven, Nijmegen, and Scheveningen. Karin Maria Kwant reviewed the performances for Mens & Melodie:

‘Hungarian soprano Adrienne Csengery and English mezzo Patricia Price were utterly charming as Fiordiligi and Dorabella; they impressed the sold out house with both their voices and their acting. Nan Christie as Despina was a vixen! Wynford Evans and John Bröcheler were both singing and acting fabulously as the officers Ferrando and Guglielmo. Don Alfonso was sung by Thomas Thomaschke, IVC First Prize winner 1971 and three years later appointed Kammersänger. Director Jan Bouws staged the production. Conductor Hans Vonk gave a balances and inspired reading of the score with the Brabant Orchestra, augmented by the Dutch Chamber Choir.’ (Karin Maria Kwant, ‘Internationaal Vocalistenconcours Kwart Eeuw,’ Mens & Melodie, Oktober/November, 1978) 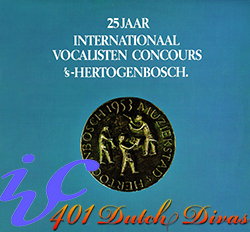 In September a double-LP was issued with recordings of former IVC winners. More on the vinyl release can be found on our audio page

The municipality of the City of den Bosch used the occasion of the 25th jubilee of the IVC to decorate one of it’s founding fathers, Frans van de Ven, {HYPER TO REMINISCENSCES 1984 TO BE MADE} now chairman of the IVC organizing committee of Foundation ‘s-Hertogenbosch Muziekstad. In his speech, vice Mayor G. Verkuijlen stressed that the impact of Den Bosch in the Netherlands, Europe and beyond was a splendid promotion of the city:

‘For a middle sized city in the province of The Netherlands it is truly an honor to be mentioned again and again in line with competitions in mostly world famous cities around the globe.’

The festive occasion was enlivened with a concert of former IVC Prize Winners, singing, among others, pieces by Fauré, Brahms, and Haydn.