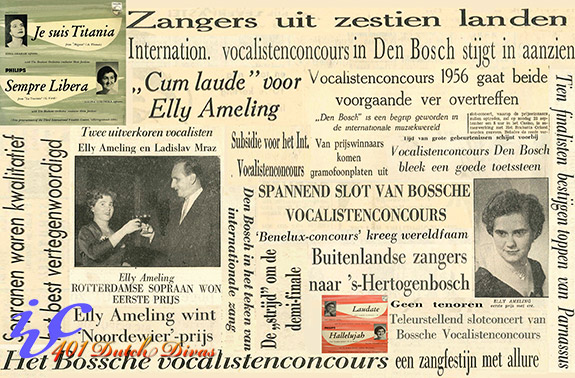 The efforts of the IVC organizing committee of the Foundation 'Den Bosch City of Music' to attract a higher general level of participants by means of recruiting singers who were already at the outset of their careers rather than complete beginners were acknowledged in the press. Wouter Paap of Utrecht's Katholiek Dagblad opened with a summary of the achievements of the Third IVC:

'Not only were there significantly more participants (from 70 to 120 this year), which may well have been caused by the raise in prize money. With ƒ 1000 for First Prize winners, the prize money was four times as big than it had been the year before. The interest among singers has noticeably increased, and with it the average level has risen. There were now participants from Germany (25), England (15), France (14), Belgium (12), America (5), Switzerland (4), Czechoslovakia (3), and then also from Luxemburg, Denmark, Sweden, Hungary, Spain, Argentine, Mexico and Israel.'

'Her diction was more clear than had been the case with any of the other participants, while her technical security and her musicality as such also showed in the 'Jewel aria' from Faust, and the 'Laudate Dominum' of Mozart.'

Paap also noted that the jury had a difficult task because all participants had to perform in opera, song, and oratorio, while none of them mastered all three genres equally.

'When it was her turn, it wasn't a lady that stepped forward, but a man. The jury was stunned, while the participants laughed their hearts out when the man announced himself as Charlys Morel from Lyon, age 27. The Frenchman, whose voice hadn't broken during puberty, had indeed enlisted in the soprano category. He didn't make it to the finals.'

The Oost Brabant newspaper noted that the IVC now equaled the famous Vocal Competition of Verviers in numbers of participants. In addition, it thought much of the idea to release gramophone recordings of the prizewinners on 45RPM.

'Given the current level of the competition, surviving the first shift and making it to the semi-finals is an achievement in itself'.

True as that may be, Dutch tenor Willem van der Sluys, 2nd Prize winner of the 1955 competition, was the perfect example of what advanced Dutch singers feared: a second prize winner in 1955, he didn't make it to the finals now.

Delboy Baer published a fascinating retrospect of the competition in Dordtenaar. He stipulated that a significant number of prize winners (Ameling, Willems, and Mráz) had not studied at any conservatory. Without further explanation, he stated that the failure of conservatory singers was 'due to the fact that at conservatories one had to spend too much time with theory and other unnecessary courses than with singing.' Rather than being glad with the discovery of Ameling and hearing the famous Ladislav Mráz (Baer was the only journalist who stipulated his status), he concluded that 'the competition had not brought any significant voice, except perhaps... the voluminous alto Ursula Boese (who was only given an honorary medal since the jury judged her technique imperfect).'

Whereas one might debate some of his opinions, he was clearly spotted Boese's talent. In addition he was also far less negative about the results of the second competition that had produced Eva Bornemann, whose star had risen swiftly in the year that had passed since her victory in Den Bosch.

After so much serious words about the pros and cons of the third IVC, the opinion of a foreign observer of an unidentified English newspaper, sets things in perspective. So, the Kathleen Ferrier Prize for altos and the Jacques Urlus Prize for tenors was not awarded, but he was sure the competition would remain 'popular with the audience,' and continued to praise the splendors of the city and it's surrounding landscape:

'It is a wonderfully attractive place, ideally located with luscious, Holland-type, fields o none side, and the beautiful woods of Brabant on the other. Among it's fine monuments of old architecture, the famous Saint John's Cathedral and the baroque town hall are outstanding.'