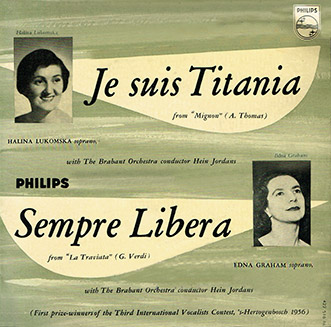 Perhaps it didn't take much genius to conceive the plan to launch a series of 45RPM recordings with arias taken from the Final Gala Concert of the winners, but by 1956 it was certainly visionary. It would take decades before other vocal competitions would follow the IVC example. Regrettably for the IVC, competitions such as the Queen Elisabeth Competition in Belgium had much more luck with their recording efforts. The IVC plan failed before it had started to the complete failure of recording, release and distribution partner Phonogram to realize the project on their Philips label. The plan was simple: use the KRO broadcast recording of the gala concert to release a series of 45RPM recording, presenting all finalists. All it took was an extra allowance for the Brabant Orchestra and Hein Jordans, to obtain the rights. Agreement with them was swiftly reached. Problems only started from the moment where the KRO tapes reached Phonogram. In hindsight, the soap opera that followed is as tragic as it is an unbelievable case of 'Murphy's law.' Recorded on September 27, 1956, the only thing that was achieved by July 25, 1957 was an excuse letter by Phonogram's head programming Nico Boer. He explained the delay due to an over full agenda in the period following the final IVC concert, which coincided with a shortage of workers, which lasted until February/March. Once fully operative, a sequence of illnesses caused further delay, including a car accident that caused Boer himself to stay at home for 4 months. Once back on his post, he examined the material and found the larger part of the recording technically imperfect. What remained was 'just about good enough' for three 45RPM recordings:

The rest was rejected, and he dismissed the soloist therein from their obligations, which had been obtained by means of an option contract, that was not used. Finally, Boer, apparently a rather cold blooded chap, had the nerve to inform the committee that releasing those three 45RPM's was also going to take 'a lot of time.' In fact, release could not be expected until the 1957/58 seasons. His final words:

'I deemed it fit to inform you of this, and express the hope that the three 45RPM recordings will prove a success after all.' 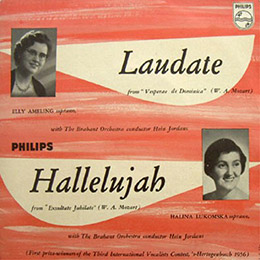 By November 9, 1957, Phonogram asked for photos of the singers, since they wanted to present them on the record sleeves. The symphonic piece by the Brabant Orchestra was then already eliminated. The final two 45RPM releases of early 1958 suggested that Halina Łukomska was the star of the third IVC, with two released arias, while the home audience would of course have been looking out for Elly Ameling. Moreover, the Great Prize winner Ladislav Mráz was completely absent.

Just how important such releases eventually become is clear from the Edna Graham recording. Graham eventually became a favorite Queen of the Night at Covent Garden during the early 1960's, but no recordings of her voice other than the IVC release have ever been published. That 45RM is now the only extant testimony of her voice. If you would have been able to identify her, since Phonogram mixed up the photos and switched Graham's picture with Halina Łukomska's (on top of this page we have corrected this, in honor of both ladies)...

Could this painful order of events have been prevented with more professional contracts stipulating the obligations of the record company? Perhaps, but the committee wasn't used to deal with such unreliable partners. They had achieved flying results by working together with reliable and very motivated local partners. Faced with Phonogram's point of view they simply abandoned the idea to continue with the recording experiment.

In hindsight this was a regrettable decision, since such recordings, if well organized and promoted, were then a fantastic promotional tool. Besides, when for it's 25th anniversary the IVC finally released an lp with a retrospect of glorious winners who landed great careers, external studio recordings had to be used for lack of recordings of these stars in the proper IVC context. It wasn't until 2013, that the plan was conceived to remaster the annual broadcasts and make them integrally available to the public.