The concluding IVC Gala Concert 1973 took place without East German bass-baritone Peter Tschaplik and Romanian tenor Antonius Nicolescu. Apparently they had obligations elsewhere, although it cannot be ruled out that the audience’s refusal to applaud them when their awards were announced played a part in their absence as well – clearly it was a last minute decision, since their names and arias were printed in the program. Perhaps an understandable decision, although one could also draw inspiration from some animosity, as did American tenor James Wagner, who subsequently achieved a fine American/German career.

According to Hein Zomerdijk for Brabants Dagblad, the radiant First Prize winner Adrienne Csengery needed a warm up round with the orchestra in Mozart, before she was in tune with Hein Jordans and his orchestra. Only in her final aria after the pauze, ‘È strano...’ from Verdi’s La traviata, she managed to conquer the audience. Before that, it was the Romanian Second Prize winner Cornelia Pop who conquered Zomerdijk’s heart with an aria from Massenet’s Hérodiade, in which she showed both musical and dramatic allure. 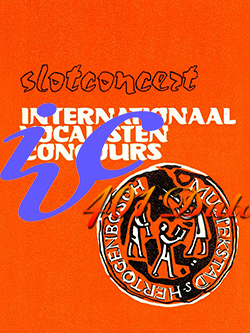 Apparently, Stefania Toczyska fared less well in ‘O mio Fernando’ from Donizetti’s La favorita, and the ‘Habanera’ from Bizet’s Carmen. Her voice sounded not very free in both. With Miriam Bowen declining on her preferred oratorio genre, and James Wagner achieving his operatic potential neither in Donizetti before the pause, nor in Rossini after the pause, the concert emerged from the review as one of the least successful editions In all. Apart from Pop, only Danish mezzo soprano Vibeke Bjelke rose to the challenge by surpassing her own achievements during the competition. She sang Ravel’sShéhérazade with great sensibility, inspiring Jordans to give his poetic best there rather than just in the orchestral overtures to Wagenaar’s Cyrano de Bergerac and Verdi’s La forza del destino.

*/** Although the printed program still mentions Peter Tschaplik and Antonius Nicolescu in the final concert, the review quoted above states that they did not appear. Toczyska’s ‘Habanera’ is not listed in the program. Apparently, it was inserted as a substitute for Nicolescu’s Faust aria, although it is not clear if it was actually on the place where we have listed it above.