1968 THE PRESS ON THE VOCAL COMPETITION 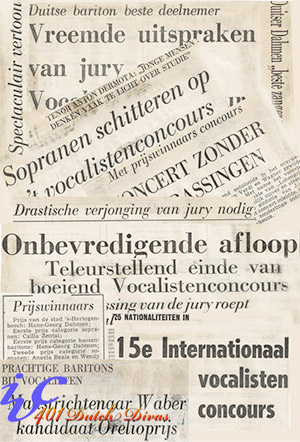 ‘We know President of the jury Manus Willemsen as a true gentleman, who has learned his trade in 15 successive IVC’s. However, perhaps this time he should have slammed his fist on the table in order to stop the – likely – arguing among the Jury, whose members must have been riding their own favorite horses. They should have been forced to make a more swift decision […[] than the two full hours needed on Saturday evening – an outrageous record. […] In fact, one might even say that it would have been better had the Jury decided to postpone the decision to the next day, so they could sleep it over. For what they came up with now, was not to the taste of some people, who had good grounds to challenge the outcome.’ (Piet Pijenenborg, De Volkskrant, September 1968)

As can be seen above, the 15T IVC Den Bosch once again brought fierce opposition to the verdict of the Jury from both press and, if we are to believe the newspapers, also from the audience that audibly demonstrated it’s discontentment with the outcome of the competition.

Leo Hanekroot, long time correspondent for De Tijd on the annual IVC Den Bosch competitions, took a philosophical point of view with respect to the tumultuous proceedings, saying that as much as people found reasons to disagree with the Jury, there were always also some decisions where they found themselves in warm embrace. The latter was the case with the First prize awarded to the German baritone Hand-Georg Dahmen, and the second prize for the Romanian baritone Baciu.

Hanekroot further noted the difficulty of comparing achievements in different genres, since Csilla Zentai came out with opera arias, Beale and Eathorne with oratorio, Bollen and Oriel Sutherland with songs. His implicit conclusion was that the Jury favored opera singers, a conclusion based on the fact that both the critic and the audience had judged Cszentai inferior to [most] others. According to Hanekroot, finalists should compete in all three genres, since it wasn’t likely that any singer, who won with a song, would ever achieve a career, if he or she weren’t able to also sing opera. The current rules asked only for 1 oratorio aria, and three numbers of choices, which could be three songs, or three opera arias. Although typical Dutch, since the country had a great oratorio culture, which is likely to have been what the organization had wanted to cultivate with the rules, Hanekroot was of course right in writing that an oratorio aria is a bit in the middle of nowhere, between opera and song. If given three free choices, one piece should have been an opera piece, since only those pieces ask for dramatic voice and some knowledge of stage presence. He concluded with expressing the wish that the organization would also return to the smaller auditorium of the Casino, rather than to the larger one used this year, since the acoustics there were ‘impossible.’

All seems clear and written in ‘uniso,’ until the review Johan van Dongens account for Eindhovens Dagblad is taken into account. According to him the decision to name the German ‘tenor presented as baritone,’ winner of the tournament was the most incomprehensible decision of all 15 IVC’s that had been organized till so far. Another critic, J.S. failed to understand why Illie Baciu was awarded a Second prize while his equally fine Rumanian colleague Alecandru Farcas was send off empty handed. I would not dwell here on such a typical press versus Jury rift, if J.S. had not added an interesting sideline, in writing that such discrepancies would continue to exist, as long as the Jury refused to publish their motivation in awarding each prize.

Things got from bad to worse, when critic Eugene Eberle recommended to the organization that it might consider a rejuvenation injection for the Jury, which now featured two honorable grand old ladies:

‘Oda Slobodskaja, who arrived with a mechanical hearing aid, and Isobel Baillie, both in a distant past famous singers. Even so, we wonder if they are physically up to the challenging physical task of auditioning and discussing results for an entire week.’