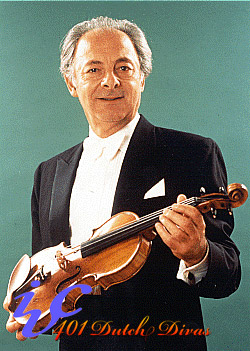 The final IVC Gala Concert on September 14, 1959 was longer than usual, due to the numerous prizewinners and the presence of an instrumental soloist, György Pauk. This violinist, second concertmaster of the Brabant Orchestra, had just won the prestigious Jacques Thibaud prize at the International Violin Concourse of that name, and was thus celebrated in the program. Mayor Thijssen, president of the Brabant orchestra honored the 22 years young violinist with a brief speech on stage, in which he mentioned that Pauk had not only just won that prestigious Parisian ‘Jacques Thibaud’ competition, but he had also recently obtained first prizes in competition in Bucharest, Budapest, Genova and München. The papers received the virtuoso player with much enthusiasm, appointing his performance of Saint-Saëns’s ‘Introduction e Rondo Cappricioso’ the highlight of the evening.

All profited from the much-improved acoustics, after significant renovation of the Casino Concert Hall. Whereas sometimes the final Gala Concert had proved nerve wrecking for a singer or two, the winners of 1959 proved to surpass their performances in competition, free as they were from the competitive element. Alto Mariette Dierckx opened the vocal part of the evening. As a first prizewinner, had two arias two sing, the over familiar ‘schlagers’ Che farò senza Eurydice’ and ‘Una voce poco fa’. In the first one the orchestra had to slow don from its fast tempi before Dierckx could demonstrate the full scope of her voice. Then she excelled in a demonstration of vocal control and an even voice, which met with much enthusiasm from the audience. Bass-baritone Arthur Loosli’s warm voice stood out, although Leporello’s catalogue aria lost a bit of its flavor in the German language rendition that the Swiss bass-baritone had opted for. Nonetheless, he amply demonstrated his great ability in the buffo genre. Polish soprano Zofia Janukovicz-Poblocka was judged stylish in Mendelsohn’s Paulus aria, while she was stunning in Lisa’s third act aria from Pique Dame.

With one aria each, the second prize winners shared in the success of the evening, with Harold Gray being a stylish bass in Händel’s Messiah, which he must have substituted at the very last minute for the programmed aria ‘O Isis und Osiris’ from Die Zauberflöte. Julianna Falk was a stylish Cleopatra in ‘Piangerò la sorte mia’. Yugoslavian mezzo-soprano Djurdjevka Cakarevic impressed with ardor and volume, but lacked a little technique as Verdi’s Azucena, while the Belgian soprano Lia Rottier closed the vocal part of the concert with a beautifully sung rendition of ‘Je marche sur tous les chemins’ from Massenet’s Manon. Praise also for the Brabant Orchestra and it’s conductor, who, given the ever-short preparation time with the more or less improvised concerts, was rather successful.

Was there for once really nothing to complain about then? Well, Leo Riemens, usually the most critical voice among the press, concluded his positive review with a complete condemning of the lighting and stenography, which left the singers completely in the dark, near invisible to the audience, or so he thought.

This being the second nearly complete IVC broadcast preserved in the 401DutchDivas reel to reel tape collection, we present here a unique array of singers, all in absolute debut recordings, and in the case of Arthur Loosli, Zofia Janukovicz-Poblocka, Harold Gray, Manya Breier, and Djurdjevka Cakarevic these are also very much the only extant recordings at all to date, bringing these singers back to the realm of the history of opera and oratorio. Although Mariette Dierckx has left a few recordings, these were never rereleased since their original vinyl pressings and are now as exceedingly rare to get by as are her more numerous KVO broadcast recordings from the 1960’s. The only one well preserved in terms of recordings, is Julianna Falk, who made a considerable career as ‘Julia’ Falk. She left a handful of , mainly, oratorio recordings that were largely rereleased on cd and are still available to date. While pondering about rereleasing the IVC legacy in terms of downloads or on CD format, we present here some samples of the concert.