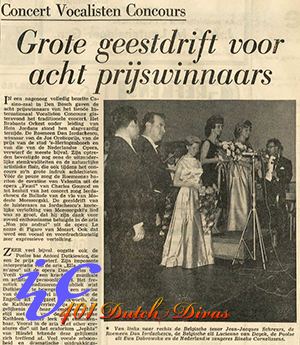 The 1963 IVC Gala Concert was a memorable one for various reasons. Time may not have favored all these then favored singers as much as it favored the heavily criticized protagonists of the previous year, yet it was the 1963 audience that induced none less than two encores in an event that previously had never seen any encore. The lucky lads cheered on to this point were the public favorites Polish baritone Anthonie Dutkiewicz and his Romanian colleague Dan Iordachescu, who concluded the concert with an impromptu encore performance of ‘Non più andrai from Le nozze di Figaro.

Brabants Dagblad was all praise, with a headline spelling ‘Tremendous enthusiasm for eight Prizewinners.’ Dan Iordachescu fully confirmed his status as triple Prizewinner (The Great Prize of the City Den Bosch, The Jos Orelio Prize and the Dutch National Opera Prize), both in Valentin’s cavatine ‘Avant de quitter ces lieux’ from Gounod’s Faust and in his closing performance, Mussorgsky’s ‘Flee song.’ The latter induced such frenetic applause that he eventually returned to the stage for the mentioned Mozart encore. Praise also for Margaret Duckworth, last years runner up to Yvonne Minton:

“The English alto Margaret Duckworth impressed. The resemblance between her voice and the one of Kathleen Ferrier was unmistakable, especially in the aria ‘Let other creatures’ from Händel’s Jeptha. Vocal splendor and dramatic intensity were abundantly displayed in ‘Liber scriptus’ from Verdi’s Requiem.” (Brabants Dagblad, September 13, 1963)

Rineke Cornelissens received compliments for her uncomplicated performance of the ‘Juwel aria’ from Gounod’s Faust, the lyric tenor Jean Jacques Schreurs was appreciated in the cavatine from the same opera, while Polish mezzo soprano Ewa Dubrowska made a major impression on us in the letter scene from Massenet’s Werther. Runner up to Iordachescu was Polish baritone Anthonie Dutkiewicz whose imposing rendition of ‘Ella giamai m’amo’ from Verdi’s Don Carlo induced the first ever encores at an IVC Gala Concert.

A bit in the shades remained Belgian mezzo soprano Lucienne van Dyck, who had some trouble matching her volume to the requirements of a full orchestra performance, although the critic still remembered her touching rendition of ‘Che faro senza Euridice’ from Gluck’s Orfeo during the finals. English baritone Peter Leening proved a little nervous during the Gala Concert, and once again could not live up to the expectations the Jury had for him on the grounds of the preliminary rounds.