1962 THE PRESS ON THE VOCAL COMPETITION 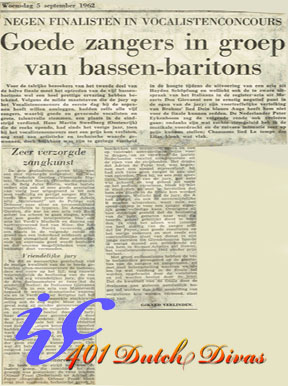 An unidentified local newspaper from Eindhoven wrote in chocolate letters that the IVC 1962 had entered a new phase: ‘Human kindness most important motivation of Jury.’ A lengthy intro actually seemed to embrace the idea, before redirecting it to the realm of the naïve. What had been the case: last year’s Second Prizewinner Olga Maddalena, an Italian soprano had now gone off empty handed, whereas a far lesser ‘small time’ American soprano Margot Nisita, as inexperienced, immature as charmingly young, obtained an Honorary Diploma. A Canadian soprano, who was judged superior to Nisita by yet another newspaper, didn’t even make it to the finals. Said the Eindhoven correspondent: ‘I can understand that you can’t give a previous second Prize winner just an honorary diploma, but sending them off without any prize is also impossible.’ This correspondent therefore concluded that – with the new rules taking effect – it would be better to exclude previous winners from reentering the competition, since they basically entered at a significant disadvantage.

A further example of the wrong direction the Jury was taking with the new rules, came in view with the baritone section, where ‘a splendid American baritone, with an illustrious timbre, much more experience than the other two baritone competitors lost his rightful first prize to a sympathetic beginner from Belgium – one that in the previous year had been judged too light to pass even to the semi-finals. In an increasingly cynical fashion he continued with pointing out that as a result the American had been awarded a contract with the Gelsenkirchen Opera, whereas the Belgian had not obtained a single job. The climax of the Eindhoven correspondent came when he crushed the Jury’s decision to also award the Belgian with the Great Prize of the City Den Bosch, which was to be seen as a slap in the face of previous winners of that illustrious prize – in fact, given the mediocre level of the winners of this edition, that prize should not have been awarded at all…

Another newspaper clipping labeled the Ninth IVC ‘poor in contesters, poor in terms of winners, rich in peculiar decisions of the Jury. There have always been some points of discussion regarding Jury verdicts in Den Bosch, but this year has surpassed all previous misgivings by far.’ As a conclusion, this correspondent already spoke of the Den Bosch competition in the past tense, since he didn’t believe the IVC had a future.

For those who have not yet looked beyond this page, it is perhaps a fitting moment to reveal the name of this ‘mediocre,’ and jobless Belgian dilettante who won the Great Prize of the City of den Bosch: Jules Bastin.

In defense of the Press

At times we have had to defend the Jury on this page, and we will now do here the same in defense of the press. If one thing has been made clear in this page after nine years IVC Den Bosch, it is that what one hears on a few consecutive days is not always enough to judge everything. At times, the Jury has been reviled, even given a brevet of total incompetence (such as in this year), whereas in hindsight they were right with their judgment – certainly in this year, where Bastin proved to be a singer who would enjoy an international career of such repute, that he now stands as one of the greatest IVC winners in all. Likewise, we point out that Richard Novák’s reputation far exceeded the confinements of the Czech Republic where he celebrated most triumphs of his impressive career. His now legendary Supraphon recordings eventually brought him international recognition to the point where recording labels such as Decca and DGG eventually engaged him for recordings of Czech and Russian repertoire. Alas, journalists have often shown to have different ears than professionals in the field. Yet, beyond the point of right and wrong in terms of any given winner, the press still provided meaningful food for thought. Bastin was of course a lucky strike at the perfect moment. His Grand Victory would help boost the reputation of the IVC for decades to come, although we should not fail to point out that bass Richard Novák also made a superb international career from his home base in the Czech republic, where, following his IVC Prize 1962, he would become the prime bass of the 1960’s and 1970’s.  Perhaps the press craved tenors and sopranos more, but dubbing the discovery of two of the ten greatest post war bass-baritones in one competition ‘the worst result since the founding of the competition,’ is in hindsight ‘bewildering.’ 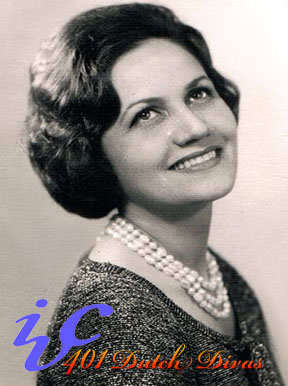 Yet, we sympathize with those members of the press who pointed out that sending off a former second Prize winner as Olga Maddalena empty handed was a painful decision – even if perhaps the right one, since no one has heard of her since. The correspondent of the second unknown newspaper clipping provided an interesting sideline to that, when he said that if ‘human kindness’ was to play a part in the jury’s decisions, they should also keep in mind that as much as winning a competition could boost a singer’s career, losing could also break the career of any given aspiring singers. Here again we arrive at a point where, although we can understand both the positions of the organization, the press, and the Jury, the nature of any given competition requires that not all participants can win. As for Olga Maddalena, she took a pragmatic view on the outcome, when she said:

‘I love Holland, I love the people of Bois le Duc (‘s Hertogenbosch), I don’t like the Jury, but they aren’t Dutch!’