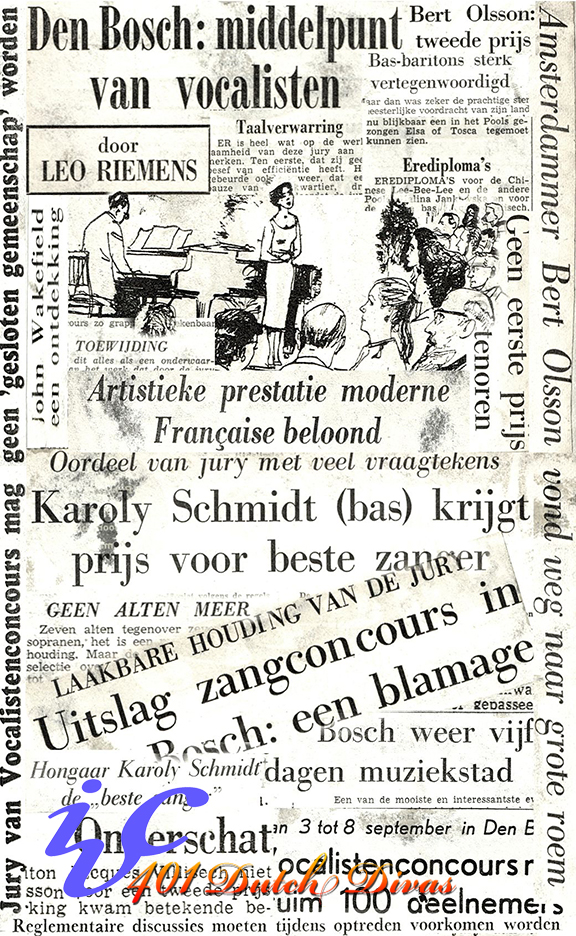 There have been times, when I wondered if we should make this page at all, given the countless opinions that some journalists have published again and again in an ongoing battle with the Jury. There are, however, very good grounds for us to have opened our archives without any restrictions.

To begin with, time has put the past in a different light; for the first 40 years of the competition right or wrong is now determined, although admittedly, this is more an entertaining game, than a relevant issue. The main reason for including even the most bashful press reviews lies in the fact that the Jury was never obliged to motivate their decisions in detail. Therefore, any deeper insight in each year’s competition can only be provided by the discussions among the press. Since journalist seldom seem to agree with each other, we imagine their own inner conflicts to reflect those within the Jury. The public reflections provided by the press also give a fascinating insight in the formative years of certain singers. With their strong support for personal favorites, they frequently managed to arouse curiosity after some mysteriously forgotten careers. At times, they also make one curious after names that were hailed as ‘sensational,’ while nothing has been heard of these singers ever after. Such research might be judged meaningless, had we not occasionally been able to find back unexpected recordings of the concluding Gala Concerts, sometimes even from the preliminaries, or from the private archives of any given singer.

The title of this anonymous review is a bit misleading, in that the author paraphrases the IVC’s plea at an early press conference to moderate any given opinions as such, rather than formulating it as a personal attack on Jury and/or organization. The journalist of ‘Vocal dramas in ‘s Hertogenbosch’ follows this lead, suggesting that ‘the real drama’ at the IVC is not the level of the Jury, but the atmosphere in the corridors around the auditorium, between candidates appearances before the Jury. Hope and fear cause many a singer to approach the point of a nervous breakdown, which affected the audition of English soprano Jenny Hill:

‘… A very young artist, who nonetheless seemed well on her way to steal the First Prize from under the nose of her more experienced colleagues. We have written before that she was our favorite, and repeated it after having heard her in the semi finals. The drama occurred during the finals, where she failed completely. She cut a pitiful figure there, a nervous wreck, lost on the stage, after which she finished herself off by a having overestimated her limits in terms of repertoire.’

Another drama: the Dutch soprano Tine de Bree, blessed with a gorgeous timbre and an equal musical taste. Unfortunately, her presentation and diction were meaningless. We had wished her some prize, or the finals, but the Jury had no mercy with her lack of expression, and the weaknesses of most other Dutch participants.

The third drama occurred around heroic tenor John Wakefield, who only obtained a Second prize. When will a tenor ever win here? This seems impossible, given the requirements. They want brilliance in the highest notes, and when he can’t demonstrate that, the Second Prize is the maximum possible. If he has a great voice and equally great musicality, but no High C, again, the Second Prize is all that remains. But name me a young tenor that has a High C, and brilliance in the upper register, who can demonstrate that without making a show of it? I believe any tenor who has a healthy musical sense and a great voice deserves a First Prize.’

Finally, we arrive to the drama of the Jury, which shouldn’t become a real drama, as long as the organization keeps protecting them as they have always done till so far. Any final judgment is bound to be within a scale of margins that can be very close together. They count many aspects of the performances, and ultimately come to a final result. A journalist can have personal favorites, but to attack the Jury because they don’t do our exact bidding is unrealistic. Likewise ridiculous are the allegations that the organization should rejuvenate the Jury, whereas the same journalists can’t appreciate Lise Arséguet merely because she gained her victory with interpretations of contemporary music.  As if Albert Rousseau, Francis Poulenc, and Giancarlo Menotti didn’t compose music that can serve to judge one’s voice!

I believe that the fierce attacks on the Jury are indeed not helping this competition’s growing reputation abroad. It would be far better to respect the judgments of others even where they are not a copy of our own individual believes.’

A year of general consensus

By general consensus, the 1960 edition of the IVC was extremely successful, with a record 101 participants, and a very high general level. Naturally, every critic had his (critics were then always male) own favorites. There were quite a few who had wished a better reward for Dutch soprano Tine de Bree than just an Honorary Diploma, and Leo Hoost of Haagsche Courant believed that French baritone Jacques Villisech was likewise underestimated. Where most critics had wished for John Wakefield to be given a First Prize, Algemeen Dagblad thought both tenors richly rewarded with a Second prize. Since that critic disagreed with almost all prizes, except the one given to Bert Olsson, he suggested dismissing the Jury, which over the years had hardly been changed. J. S., writing for yet another newspaper, agreed that the Jury showed too little fluctuation over time, especially since it was a public secret that either First or Second Prizes, as well as Best Singer of the Competition Awards had frequently been decided with but a single vote difference. Having said that, J.S. added that to criticize the Jury based on individual taste was rather donnish, bordering on the arrogant.

In De Volkskrant, Gérard Verlinden ultimately lamented the elimination of English bass Roger Stalman during the semi finals, since he showed great taste in choice of repertoire, and gave a masterly recital, both in English, German and French. Stalman seems to have been the victim of a public discussion among the Jury, regarding his choice of arms with respect to an Händel ‘opera aria,’ which was his pick in the oratorio section. By the time he was preparing to sing it, the Jury started audibly discussing if they should disqualify him or not. Odd indeed, since the program had been given to the Jury long in advance. However, he did enjoy a provincial career in the UK, as is testified by several recordings from the period 1956-1958, among them Händel’s The Messiah:

Another oddity of sorts seems to have occurred within the alto section, initially 7 heads strong against 47 sopranos. Only one alto passed to the finals, Bridget Foster, while Verlinden noted that she was really a lyrical… soprano (in fact, she had entered the competition as such – RS)! Verlinden then labeled the election of Sigurdur Björnsson as a finalist, ‘one of the typical mysteries that make such competitions ultimately very entertaining.’ Finally, also Verlinden reflected on the IVC’s request to the press to think twice before turning articles into polemics:

‘The final judgment is theirs, and ours is the task to comment on it.’

The IVC’s efforts to make the press aware almost paid off, since the aggressive tone that had marked a surprising number of reviews over the past years was almost completely absent in 1960. Almost, since the eminent Dutch critic Leo Riemens could not be persuaded to change the line of his recurring assaults at Jury and organization; his pen would occasionally crush even individual singers. The 1960 awards were a novum in so far, that he added a voice to his words, wrote Gérard Verlinden in De Volkskrant:

‘It was […] an interesting phenomenon, to hear this countries well known critic Leo Riemens give a solo whistling concert, in response to the final results. He could not agree with the outcome, and, although less audible, so couldn’t the audience.’

Riemens’ outspoken comments sort of present him as a self appointed Judge, Jury, and executioner in one. Having been a fan of his Great Opera Book since I was 18, and having benefitted tremendously from the Kutch-Riemens Grosses Sänger-lexicon, I found myself rather surprised by his IVC reviews over the years. I have always regarded the differences between press and Jury as an entertaining element that by nature belongs to such competitions. Right or wrong is not really an issue, after all, it is just opera, not a real war… Still, time proved Riemens almost always wrong, from the crushed young Michele Molese in 1956 up to the 1960 soprano that should never have been allowed to even pass to the finals, because Riemens didn’t like modern music: Lise Arséguet. Following his whistling concert, he wrote yet another attack at the IVC, which spelled that in the USA the rule was that you couldn’t be trialed by the same Jury twice, which was precisely what happened annually at the IVC, to the detriment of Harold Gray, whose second appearance should have been before a new Jury. Regarding the outcome, Riemans listed the blunders à la Beckmesser: Arséguet shouldn’t have passed beyond the semi finals, Schmidt was the least of the five basses, the best singer at the finals was Harold Gray who merely got an Honorary Diploma, Torbus-Mierzwiak should have been disqualified for singing Weber in Polish, Wakefield was far better than Björnsson, and the Encouragement Prize went to a singer who didn’t even pass the preliminary round, even though she was in effect the best singer in the entire competition, Tine de Bree. Next, Riemens disqualified the Jury as wholly incompetent, ‘even in the department of keeping order,’ and that was only before he reached his final paragraph, titled ‘the worst is yet to come’…

Ignored by the press and Jury was Hungarian bass Tomory Nandór, who nonetheless carved out a fine career for himself onwards. We present him here in a representative performance as Brighella in Wagner’s youth opera, Das Liebesverbot, from the Graz Opera, 1984.