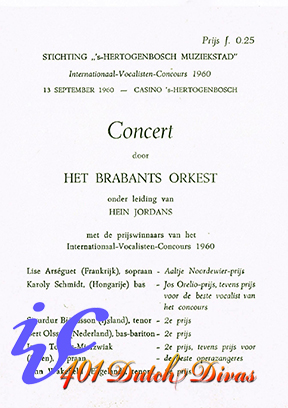 Given the usual heated discussions in the press with respect to the final results, and the singers who should have been singing at the final concert, instead of some of those below, the audience once again sided with the Jury. All reports we have of this concert unanimously acknowledged that the outcome was short of a triumph for organization and singers alike. The young performers were given a standing ovation by an audience of 1000 spectators.

The first choice of the Jury, the Hungarian bass Károly Schmidt, proved a favorite with the Casino audience as well. He proved his worth in the famous bass arias from Mozart’s Le nozze di Figaro, and Mussorgsky’s Boris Godunov. Critic M. C–V., in an unidentified newspaper clipping, thought Schmidt a fine singer, although not strong and mean enough to give a credible interpretation of Boris Godunov’s monologue. Mozart’s ‘Hai gia vinta la causa’ was likewise well sung, although it had little to do with Mozart in terms of interpretation. This also affected the Zauberflöte overture by the Brabant Orchestra, conducted by Hein Jordans, although another critic though the performance of this overture ‘fantastic,’ just as the overtures by Weber and Gluck. M. C–V. praised especially the violin section in the latter two, as brilliant and ringing.

Bert Olsson, the only Dutch singer who was judged worthy of a Prize, was frenetically cheered following his rendition of the ‘Prologo’ from Leoncavallo’s Pagliacci. The lyric tenors John Wakefield and the – apparently very lightweight – tenor Sigurdur Björnsson proved worthy of their second Prize. The only point of discrepancy between audience and Jury was to be seen in the soprano part, where First Prize Lise Arséguet had set an impossible task for herself with Ravel’s song cycle Shéhérazade, which she had to sing from the score, to the point where she hardly managed to look into the audience. The anonymous critic of ‘Den Bosch juichte zangers toe,’ acknowledged that she did give a refined reading of the songs, but her failure to connect with the audience resulted in much louder applause for second Prizewinner, Polish soprano Irene Torbus-Mierzwiak. Having read that, we stress that Arséguet had set for herself the greater task of the evening. Critic M. C–V., in another unidentified newspaper clipping, also praised her interpretation as the highlight of the evening, ‘even if Torbus-Mierzwiak had a larger voice.’ One might even say that, even though such festive occasions call for operatic bonbons, it testified for Arséguet’s artistic intelligence that she didn’t succumb to the temptation to compete in areas where her Lieder voice could probably not compete, given that she already had some trouble to raise above the orchestra in the more dramatic moments of Shéhérazade. However, ‘N,’ in the third unidentified newspaper clipping that we have from this evening, judged her performance ‘distinguished,’ and ‘heart conquering.’

‘Following his rendition of ‘Cielo e mar’ from Ponchielli’s La Gioconda, it is a mystery to us why he hasn’t been awarded the First Prize in the tenor category. A glorious voice, and a singer with utmost musical intelligence.’

From the department Lost & Found…

An unusual incident occurred around Irene Torbus-Mierzwiak, who was supposed to sing as Nr. 4 in the program. When she proved missing when her turn came up, she was once again presented, now following the overture after the break. Most peculiarly, she was once again missing when the concert finished and it was time for the curtain calls, and the final words of praise from head of the organization, Mr. J. Coopmans. Since we can’t imagine her having had more interesting affairs then and there, so we assume that either nerves or the language barrier between Poland and The Netherlands had resulted in some confusion on her part. The critics gladly forgave her, for, to speak with M. C–V.:

We would not have wanted to miss out on her beautifully sung aria ‘Wie nahte mich der Schlummer’ from Weber’s Der Freischütz. This Second Prize winner has a powerful, and flexible soprano and the audience couldn’t wait until the orchestra had stopped playing, with erupting in a thunderous applause.

* Polish soprano Irene Torbus-Mierzwiak was listed as Nr. 4 in the program, but when her turn came up, she proved missing. Therefore, her appearance followed upon the opening overture after the break.