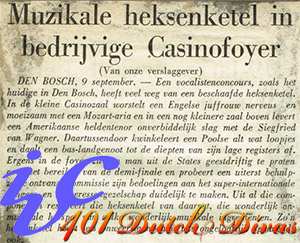 At the time of writing, both Bernard Kruysen and Peter van der Bilt have passed away. Neither still among us are Evelyn Lear, Michele Molese, Halina Słonicka, Ranken Bushby, Mariette Dierckx and Aurelio Estanislao, the only other participants that are still locally known in name today. Fortunately, a journalist from an unidentified local newspaper left us an imaginative description of the proceedings at the 5th International Vocal Competition Den Bosch:

'A vocal competition as this one here in Den Bosch, resembles a hullabaloo. In the Casino's small concert hall an English lady is nervously wrestling with a Mozart aria. In an even smaller room on top of the first one, an American heldentenor is waging war on Wagner's Siegfried. In between a Polish alto is playing with some runs, while a Polish compatriot bass is descending to the depths of his powers. Somewhere in the foyer a man from the United States is shouting his happiness over reaching the semi finals from the rooftops, while a welcoming committee is trying to explain everyone what should be done. All these ingredients together produce both an irresistible musical hodgepodge and the nerve wrecking hullabaloo described earlier.'

The stories behind the singers proved fuel for the press. Take for instance American tenor William Flaving, who used his savings to cross the Ocean between Boston and Den Bosch, accompanied from his 'Spanish looking wife', in order to see is he could make it to the finals. Why? In order to make a break into singing, and away from the machine plant where he has been working for the last six years, while studying singing in the evening, saving whatever he could in between for the day when he needed it. Of all possible causes, he chose the 1958 IVC in Den Bosch to spend it on. In between he gave small-scale recitals, and appeared in local oratorio performances in Boston and surroundings. A break into the profession he wasn't yet able to achieve, since singing wasn't the most secure and well paid profession in America. With a place in the semi-finals, his mission is almost accomplished: 'If I make it into the finals, I will get offers and won't have to return to that machine plant.'

•
The regrets of Joan Watson

Hope and disappointment go hand in hand at vocal competitions, and Den Bosch was no different in this respect. For the English mezzo-soprano Joan Watson all ended in the first round. Untypically, she didn't blame the jury, but admitted that nerves had seized her. Still, she had good hopes for her future, and planned to travel on to the Eldorado of song, Austria, and it's beautiful mountains. She even announced that she might try her luck again the next year, provided the organization would make a separate class for mezzo-sopranos, since enlisting them either within the alto group or the soprano department was unfair. 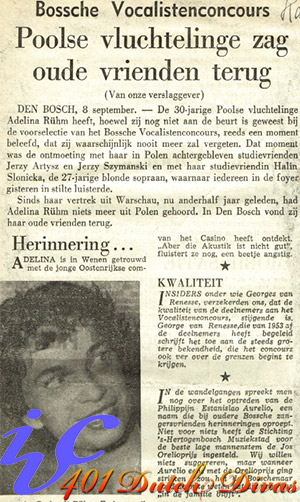 The growing number of East-European candidates at the IVC resulted in some apparently emotional encounters between – state endorsed – singers from communist Poland, and refugees that had been cut off from family and friends, such as Adelina Rühm. Thirty years old at the time, she was reunited in Den Bosch with her former classmates Jerzy Artysz, Jerzy Szymanski, and Halina Slonicka, who had remained in communist Poland. Rühm had allegedly fled from Poland one and a half year previously, to Austria, where she married the young Austrian composer Gerhardt Rühm, thus obtaining the Austrian nationality. Rühm:

'I read about the contest in a Viennese newspaper. A friend had previously also mentioned it to me, and so I decided to come here with my husband, who also accompanies me at the piano. A great opportunity to find out where I stand in my development, and to see... Amsterdam!'

Rühm then returned to the door, listening in to her friend Halina Słonicka's performance. Remarkably, she turned out to have quite some experience, not to say unusually much for a contester at a vocal competition. A bit shy but not less proud, she showed the journalist of an unidentified local newspaper programs of her performances with Herbert von Karajan, and from her performances in Warszawa and Vienna, where she was a celebrated Königin der Nacht in Die Zauberflöte, and Blondchen in Die entführung aus dem Serail. On top of that, she had performed as a guest in the Stuttgart Opera House. The she rises from her seat and returned to pry into the auditorium of the Casino's small concert room, saying: 'Aber die Akustik ist nicht gut.'

Once the paper was printed Rühm gave a second interview, where she stated for the record that she was not a refugee. She had left Poland in a completely legal way, through marriage, and thus she had gained Austrian citizenship.

•
How dare you sing like that before Julius Patzak!

Today, the general opinion is that pop music voice contests on television are outrageously negative in their approach of young, inexperienced, and sometimes overtly naive contesters. In the old days all seems to have been more reserved, and positive. Judging from 1950s television broadcasts, this may have appeared like that, but IVC conductor and jury member Hein Jordans would have made an excellent panel member in 'Idols,' given his rather direct comments on the level of the participants:

'The competition has certainly gained in average level. However, it remains striking to see the enormous differences in development between candidates. There are excellent voices, good voices, but also voices that should shame their bearers. How dare some sing so outrageously bad in front of a celebrity such as Julius Patzak!'

Following these words, the author commented that it was perhaps a good thing that the preliminary rounds were held behind closed doors, since that saved the journalists from a lot of irritation.