1958 THE PRESS ON THE VOCAL COMPETITION 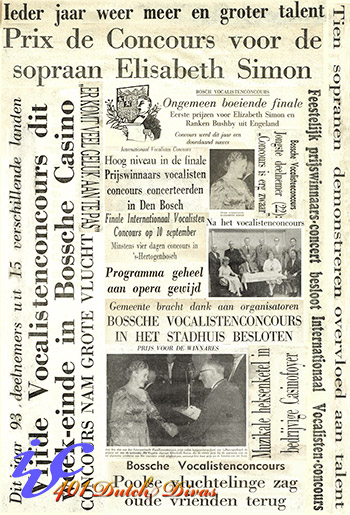 Immediately following the 1958th International Vocal Competition (IVC) Den Bosch, the conclusion of the press was that it was a great day for the IVC, but a less great day for Dutch singers, since 'only' Bernard Kruysen made it to the finals.

Both Piet Pijnenborg of De Volkskrant and Leo Riemens in The Telegraaf followed the verdict of the jury when he wrote that the 5th IVC contest was a victory for the British school, with Ranken Bushby and Elisabeth Simon coming out on top. Pijnenborg had a weakness for the fiery character of Halina Słonicka, but admitted that the tricks and treats of Simon in Richard Strauss's impossible Zerbinetta aria from Ariadne auf Naxos were hard to beat. Likewise, Maria Antonietta Sighele seemed to have a very attractive instrument, but she sang three monotonous pieces that did not give her any ammunition to fire with. Riemens, Holland's leading critic of international repute, blamed the jury for this: each candidate had one number of choice, and the jury selected the other two apparently without looking to the choices made by the soloists. This also affected Nell Allen's chances, since she came out with three similar, slow tunes.

All critics acknowledged the surprise of the competition; it's first Philippine contester, Aurelio Estanislao. First prizewinner Ranken Bushby had the greater baritone voice of the two, but Estanislao was unanimously judged the greater interpreter. Bernard Kruysen talent was beyond doubt, although he still had a lot to learn. According to the Volkskrant foremost in singing, according to Riemens in choosing the right priorities:

'He was absent from the announcement of the winners, since 18.30 was dinner time for him.'

Halina Słonicka sang the aria from the Pearl Fishers in Italian in a grand style, which reminded Riemens of Slavic primadonnas of ere, such as Sembrici, but she lacked color. Loris Sutton made two wrong entries, and, notwithstanding that he had just praised Słonicka for singing Pearl Fishers in Italian, Riemens scolded Prague born Alena Havlicová for the mistake to sing an aria from Faust in Italian. However, on the sliding scale Evelyn Lear scored fore last with the critic:

'She judged it wise to attempt Traviata in German language, and, together with Sutton, she was not on a par with the others.'

Riemens reserved his worst comments for the American tenor Michele Molese – from Amsterdam:

'He proved to possess a tremulous voice with a cheap timbre, and it was impossible to understand how he even made it to the finals' [Riemens mixes up the semi-finals and the finals, Molese stranded in the semi-finals – RS].

Kind words were reserved for William Flavin, whose promising heldentenor voice was likely to stand out at a year's distance, when the next competition was due. Leo Hanekroot, writing for De Tijd, finally brought up a true 'dispute,' regarding the elimination of Austrian soprano Anne Rothgeb. Hanekroot had her among his favorites and her elimination caused some heated debates among spectators:

'In such moments, fans can judge juries rather harshly. That is not altogether righteous, since juries have the task to judge along professional lines. Apart fro that, such disputes are a large part of the attraction of such contests.'

Having said that, Hanekroot continued saying that the jury's decision was completely wrong; he couldn't accept her being cast aside for 'far lesser talents'.

'Could not the Dutch Opera intervene on her behalf and give her a chance...'

Both the jury's verdict and all reviews together prove once again that judging voices at any given point in time with respect to future chances is not rocket science. Any audience at large did not answer Hanekroot's flame for Rothgeb, although she sang throughout the 1960's, mostly in a religious context. In hindsight, the future would certainly have had Peter van der Bilt among the winners, whereas anyone looking a the mere names will be surprised to see that Evelyn Lear and Michele Molese weren't recognized by either the jury or the press. Perhaps Lear, Molese, and Van der Bilt simply weren't ready then, and stepped up their efforts in order to become what they were destined to become: the most famous participants of the contest in retrospect, along with Kruysen. Winning the IVC is great, but learning from one's failure can spur any given singer to unthought-of of heights, which is perhaps the most significant lesson from the 1958 competition. We do believe that it is fascinating to finally see not only the statistics of the winners here, but also of those who didn't make it then.