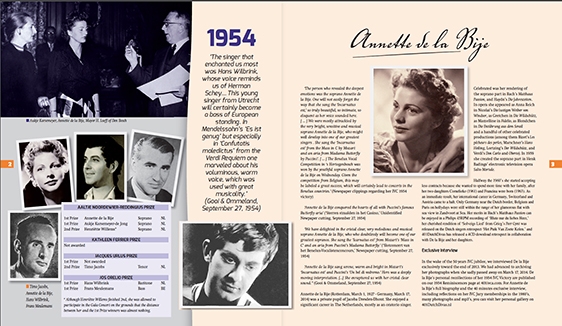 Currently, the 401ivca.com team is working on the production of the 50TH International Vocal Competition (IVC) ‘s-Hertogenbosch jubilee booklet, which will break with the tradition of previous booklets. In the past these were usually a balance between the formal history of the IVC seen from within the organizing board, and more or less aimed at a limited audience of intimae. We decided to make the new jubilee book such as we imagine the public would like to have it. With ‘public’ we are referring no longer to the Dutch only, but to the world’s audiences as such. While we do not wish to blow things out of proportion, we have finally come to terms with the fact that the IVC’s fame is spread to the most remote corners of the World. From early on, the competition easily included 25 or more nationalities and currently the applicant numbers are approaching the number 500, which is 5 to 8 times more than what it was in the first 25 years. Most participants do not speak Dutch, and neither does the larger part of the jurors and the international contacts of the IVC speak Dutch. Therefore, we decided to not just make the website in English, but to also publish the 50th Anniversary jubilee booklet in English. Thus, all these thousands of people who have always been wondering what Brabantse gezelligheid was all about can now finally sample it in a language they understand. And no, we do not intend to print 1000’s of books, the jubilee books are not really for sale except ‘at the door’ for a select number of collectors. Otherwise they will be used as a promotional tool for the organization. However, we will publish a free pdf version online, that will doubtlessly be downloaded in large numbers, thus spreading the name and fame of the competition.

The concept of the booklet is actually easily explained. After a foreword by IVC CEO Annett Andriesen there will be a short 15-page introduction to the history of the IVC in terms of organization, changes through time, with comments from former jurors, singers and people from the board such as the legendary Eugène Pannebakker. Andriesen will explain the changes she made over the past decade, and comment on where the IVC is heading to. Then there will be 50 spreads with on the left page the complete results of each year, along with the official Winners photo, and some portraits of other notable participants. On the right side will be a portrait of one or maximum two singers from that particular competition. These are not necessarily the winners of the day, but those who for some reason in retrospect are the most interesting ones. Perhaps we will even smuggle some in the text that arrived to ‘s-Hertogenbosch a little too soon, such as Helga Dernesch, who did not survive the preliminary rounds in 1955!

The complete results have never before been available, not even within the IVC archives have they been filed. We have reconstructed them from thousands of newspaper reviews.