So many prizes, it’s almost embarrassing … it was my first vocal competition, although I’ve had a lot of experience in flute competitions. That’s why I isolated myself from the jury. I didn’t even read their biographies because I was afraid that the level they had achieved in their careers would intimidate me. I especially appreciated the Young Jurors Prize. It’s nice to see that in Den Bosch the audience is very mixed. I believe young people like classical music if they get the chance. Take me – I’m a Jim Morrison fan and fanatic; I was rejected for the conservatory twice before I finally made it! For now I will first continue my studies, and then … I aim as high as possible, so long as it doesn’t interfere with my personal happiness. I will not allow myself to get lost in this business.” (Lenneke Ruiten to Hans Visser on her dazzling IVC triumph, Noordhollands Dagblad, October 1, 2002)

Dutch soprano Lenneke Ruiten (b. 1977, Alkmaar) studied voice with Maria Rondèl and Meinard Kraak at the Royal Conservatory of The Hague and opera at the Bavarian Theatre Academy in Munich. She also took classes with Elly Ameling, Robert Holl, Hans Hotter, Robert Tear and Walter Berry. In 2002 Lenneke won no fewer than five principal prizes at the IVC in ’s-Hertogenbosch, including the Great Prize of the City, the press prize and the audience prize. Since then she has established herself as one of the leading divas of what could be considered a new golden age of Dutch vocalists. Ruiten made her operatic debut as Susanna in a Munich production of Le nozze di Figaro. With The Netherlands’ Nationale Reisopera she sang Yniold in Pelléas et Mélisande, and then Ksenia in Boris Godunov. In Schleswig-Holstein she sang Mozart’s Blondchen; then, in Amsterdam’s Concertgebouw, Elisa inIl re pastore and Madame Herz in Der Schauspieldirektor. She made a very successful debut with the Dutch National Opera inDie Frau ohne Schatten (2008) and created the role of Gabriel there in the world premiere of Rob Zuidam’s opera Adam in Ballingschap ( Adam in Exile, 2009). At the Festival de Beaune she sang Despina in Così fan tutte and Armida in Rinaldo. She sang Pamina and Almirena (Rinaldo) in Lausanne and Echo in Ariadne auf Naxos (featuring Renée Fleming) in Baden-Baden. In 2011 she made her debut at the Salzburg Festival in Die Frau ohne Schatten under Christian Thielemann. In 2011–12 she sang at the Landestheater Salzburg in the opera production Musica Speranza. In 2013 she sang Zerbinetta in St. Gall and Stuttgart, toured The Netherlands as Fiordiligi and sang Ophélie in Hamlet at De Munt in Brussels. As of this writing she is making her Donna Anna debut in a new Don Giovanni production at the Salzburg Festival (photo, with Andrew Staples).

Ruiten is also in great demand as a concert soloist. She has worked with such orchestras and ensembles as the Vienna Philharmonic, the English Baroque Soloists, the Monteverdi Choir, the Staatskapelle Dresden, the Mozarteum Orchestra Salzburg, the Akademie für Alte Musik Berlin, the RTÉ National Symphony Orchestra in Dublin, the Tonhalle Orchester Zürich, the Concertgebouw Chamber Orchestra, the Bavarian Radio Symphony Orchestra, Accademia Bizantina, Le Cercle de l’Harmonie and the Wiener Akademie with conductors including John Eliot Gardiner, Christian Thielemann, Marek Janowski, Ton Koopman, Helmuth Rilling, Ottavio Dantone, Frans Brüggen and Alessandro De Marchi. She has performed in major festival throughout Europe: the Salzburg Festival, the BBC Proms, the Bachfest Leipzig, the Prague Spring Festival, the Brighton and Aldeburgh Festivals, the Holland Festival and the Luzern Festival. Lenneke also has a special passion for lieder. She works with pianists Thom Janssen and Rudolf Jansen and has sung recitals in the Concertgebouw, London’s Wigmore Hall and Frankfurt’s Kaisersaal. She has made several CDs, among them Mélodies françaises and Brahms Lieder and a 2010 album featuring concert arias by Mozart. 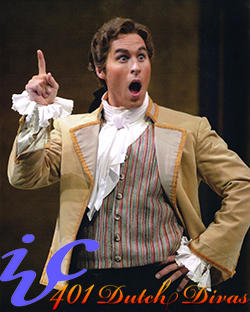 “A place in the finals and a nomination for the Dutch Song Prize with a composition by Micha Hamel gave the experienced baritone Kyle Ketelsen wings. A Dutch Song Prize for an American whose knowledge of The Netherlands stops at windmills, tulips and wooden clogs? ‘I have studied the multitonal song endlessly,’ says Ketelsen, who normally excels in Verdi and Puccini.” (Brabants Dagblad, September 26, 2009)