“Ralf Lukas’s First Prize in Oratorio and his winning the Great Prize of the City were as predictable as they were justified. His name had already been buzzed around during the preliminaries when the NOS broadcasting station already signed him up.” (Wil Derkse, Brabants Dagblad, September 2, 1991)

“German bass-baritone Ralf Lukas stole the limelight. What conviction! What flexibility, and what a nose for atmosphere. He jumped effortlessly from Papageno into the religious solemnity of Brahms, and from there back to Mozart’s Figaro.” (Brabants Dagblad, September 5, 1991)

German baritone Ralf Lukas (b. 1959, Bayreuth) attended master classes with Aribert Reimann, Dietrich Fischer-Dieskau and Hans Hotter. In 1987, after two years with the Bavarian State Opera Studio, he became a member of the Deutsche Oper Berlin, where he remained until 2002. Among his roles there were Papageno, Masetto, Leporello, Fra Melitone in La forza del destino and Biterolf in Tannhäuser. Following a Dutch Opera Forum debut as Papageno in January 1991, he proved the undisputed winner of that year’s IVC. Guest appearances took him to La Scala, the Metropolitan Opera, the Bavarian State Opera, the Hamburg State Opera, Dresden, Glyndebourne and the Salzburg Easter and Summer Festivals as well as Tokyo. When he made his debut in the title role of Katharina Wagner’s production of Der fliegende Holländer in Würzburg (2002), Der Tagesspiegel praised him as “a true ray of vocal hope for the future.” He sang Wotan in John Dew’s production of Der Ring des Nibelungen in Wiesbaden. In October 2003 he appeared with the Central German Radio Symphony Orchestra and Chorus in a performance of Beethoven’s 9th Symphony in the Vatican marking the 25th anniversary of John Paul II’s election to the papacy. During the winter of 2007–8 he sang his first Caspar in St. Gall. He made his Bayreuth Festival debut in 2006 as Das Rheingold’s Donner and Tristan und Isolde’s Melot, and in 2009 he added Götterdämmerung’s Gunther. 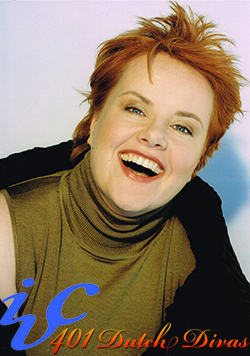 “A pleasant surprise in the Opera category was German mezzo-soprano Petra Lang, who used the finals to rise to a level that left her competitor Irina Romischevskaya defenseless. […] Mozart’s concert aria KV 505 was not just sung perfectly and virtuosically; it also demonstrated a true musical personality. That personality revealed itself even more strongly in an aria by Berlioz.” (Wil Derkse, Brabants Dagblad, September 2, 1991)

German mezzo-soprano Petra Lang (b. 29 November, 1962, Frankfurt am Main) studied voice with Gertie Charlent at the Akademie für Tonkunst in Darmstadt and at the Peter Cornelius Conservatory in Mainz, where she also attended the Opera School. Immediately after completing her studies in 1989 she auditioned for a master class with Ingrid Bjoner, with whom she studied until 2006. She also took master classes with Brigitte Fassbaender, Hans Hotter, Dietrich Fischer-Dieskau and Peter Schreier and studied Wagner roles with Astrid Varnay. She came to the IVC with stage experience from the Opera Studio in Munich and the Basel and Nuremberg Operas. Following her victory she went to Dortmund, where she learned the key roles of the lyric mezzo-soprano repertoire. In 1994 she made her Dutch National Opera debut as Tamiri in Il re pastore . In the 1994–95 season she turned to Wagner, debuting as Waltraute and Fricka in the Dortmund Ring cycle. In Braunschweig she added Brangäne, Judith in Bluebeard’s Castle , Marie in Wozzeck and Eboli. Later she became a freelance superstar, appearing in all the great opera houses of the world in increasingly dramatic repertoire. In the 2012–13 season she sang her first Brünnhildes in Berlin and Bucharest under Marek Janowski. In Bayreuth she sang Brangäne (2005) and Ortrud (2011), and she now ranks among the leading Wagner divas of our time. In addition, she is also a renowned lieder and concert singer, performing from the Concertgebouw to La Scala and Carnegie Hall.

“After her Oratorio Encouragement Prize of 1990, Russian mezzo-soprano Irina Romischevskaya had the chance to compete again, this time in opera. She conquered everyone’s heart with Vivaldi and Rimsky-Korsakov.” (Adriaan Hager, Trouw, September 2, 1991)

“The enchanting mezzo-soprano Irina Romishevskaya reached her top form only in the Gala Concert, prompting people to say that she might have deserved a First Prize after all.” (Wil Derkse, Brabants Dagblad, September 5, 1991)