“Yvi Jänicke ruled unchallenged in the Song category. She was the only one who grew stronger and stronger further into the competition.” (Wil Derkse, Brabants Dagblad, September 4, 1989)

German opera, concert and oratorio mezzo-soprano Yvi Jänicke (b. 1959, Berlin) studied voice with Helmut Kretschmar in Detmold. Her First Prize at the 1989 IVC resulted in engagements at the opera houses in Krefeld/Mönchengladbach and Bern. Since 1994 she has been a member of the Hamburg State Opera, where she has since sung over 35 different roles, including Cherubino in Le nozze di Figaro, Rosina in Il barbiere di Siviglia, the Emperor in Hans Werner Henze’s English-language opera We Come to the River and the Muse/Nicklausse in Les contes d’Hoffmann, as well as solo parts in the John Neumeier ballets Dritte Sinfonie Gustav Mahler and Messias. Jänicke has also appeared at the opera houses of Dresden, Leipzig and Stuttgart. In addition, she is a dedicated lieder and oratorio singer, giving concerts in Europe, the United States, Canada, Singapore and Japan, as well as such international festivals as the Luzern Festival, the Schubertiade in Feldkirch, the Bergen International Festival, the Lincoln Center Festival in New York and the Schleswig-Holstein Music Festival. She has made numerous broadcast recordings for German radio and television and released several CDs, among them five solo albums with rarely heard songs by Bizet, Wolf-Ferrari, Robert Volkmann, Carl Loewe and Julius Weismann, Mahler’s Das Lied von der Erde, Hans Pfitzner’s Der Blumen Rache and Bach’s Johannes-Passion. The list of conductors with whom Jänicke collaborated ranges from Semyon Bychkov, Dmitri Kitajenko, Ingo Metzmacher, Lothar Zagrosek, Stefan Soltesz, Gerd Albrecht and Edo de Waart to Helmuth Rilling.

“Belgian bass-baritone Werner Van Mechelen received the Second Prize for his song interpretations. Based on his semifinals appearance, this was wholly justified, although he seemed a bit overconcentrated during the finals, where he paid so much attention to presentation and details that the overall line was sometimes in jeopardy.” (Paul Luttikhuis, NRC, September 4, 1989) While German tenor Matthias Bleidorn and Belgian bass-baritone Werner Van Mechelen equally deserve the remaining space here, I should also mention the charming Korean coloratura and audience favorite Yung-Min Lee, who could challenge Georgi Mirostranoff’s election into our Quote section – it is precisely their current untraceability that makes one curious about their voices. Van Mechelen (b. 1961, Turnhout) studied at the Lemmensinstituut in Leuven and at the Zürich International Opera Studio; he also took master classes with Elisabeth Schwarzkopf and IVC legends Robert Holl, Mitsuko Shirai and Hartmut Höll. Following his success at the 1995 Cardiff Singer of the World Competition, he developed an international career in the realm of the great passions and oratorios as well as orchestral lieder that took him to Cologne, Geneva, Brussels, Amsterdam, Paris, Barcelona and Tel Aviv. He worked with conductors ranging from Sigiswald Kuijken, Ton Koopman and Antonio Pappano to Silvio Varviso. In opera his central roles are Mozart’s Almaviva, Figaro, Guglielmo, Don Giovanni, Leporello and Papageno; he is also known for his Schaunard, Dandini in La Cenerentola, Belcore and Wolfram, as well as the animal tamer and athlete in Lulu. He has appeared in Zürich, Liège, Antwerp, Wiesbaden, Braunschweig, Bielefeld, Coburg and Limoges, among other places. Along with recordings made for domestic and foreign radio and television and discs with baroque music, he has recorded a disc of Richard Strauss lieder and one of songs by Debussy, Poulenc and Lodewijk Mortelmans. He also conducts and teaches. 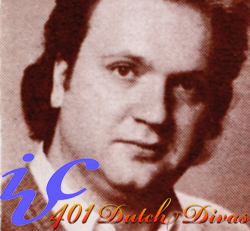 “Among opera competitors, the typical Russian bass with an American passport Georgi Mirostranoff stepped up the challenge for the others – imposing, intimidating. In Borodin, Gounod and Rossini he was stunning and ready for any opera house.” (Adrian Hager on the semifinals, Het Binnenhof, August 31, 1989) “Unbelievable that that the Russian-American Georgi Mirostranoff didn’t survive the semifinals. He had more artistic blood in his little finger than most finalists have in their entire bodies.” (Pay-Uun Hiu, De Volkskrant, September 4, 1989)