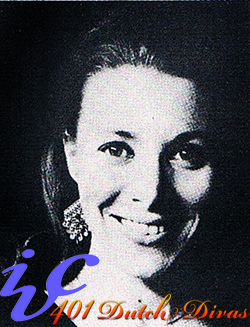 ‘The Israeli soprano Robin Weisel-Capsouto sung a ravishing ‘Allerseelen’ by Richard Strauss, for which she was rewarded with the brand new Janine Micheau Prize! […] Her touching song of resistance ‘C,’ by Poulenc was perhaps not very deeply carved, but it proved a perfect vehicle for the beauty of her voice.’ (Hein Zomerdijk, ‘Vocalistenconcours is uniek,’ Brabants Dagblad, September 10, 1979.)

Since 1961, when she immigrated to Israel from the United States, Robin Weisel-Capsouto has established herself as one of Israel’s leading sopranos and she appeared frequently in chamber and orchestral concerts. Her debut with the Jerusalem Symphony orchestra, IBA, was in Vivaldi’s ‘Gloria,’ and since then she has performed with this orchestra many times. Weisel-Capsouto has also been recognized as a talented actress for roles such as Amor in Gluck’s Orfeo, Lucy in Britten’s version of The beggar’s opera, and Madame Herz in Mozart’a The impressario. Other highlights following closely after her IVC Den Bosch 1979 Prize ‘Janine Micheau’ include Rossini’s ‘Petite Messe Solennelle’ in Liturgica 80, and Paul Ben-Haim’s ‘Bein Hadassim’ with the Israel Chamber Orchestra. She was also soprano soloist in a festive concert at the Sultan’s Pool with the Israel Philharmonic orchestra under Leonard Bernstein. She sang witht eh Jerusalem Symphoy orchestra in the 1982 ‘proms,’ in Liturgica 82 she sang in Händel’s Solomon, in Liturgica 83 she sang in his oratorio Jeptha, and in Liturgica 84 she appeared in Mozart’a requiem under Gary Bertini. Onwards, she appeared as soloist with numerous orchestras in a repertoire ranging from Bach and Händel to Paul Ben Haim, Ben Zion Orgad and other modern composers. She was particularly noted for her interpretations of the works of Mozart, and she sang under the batons of many leading conductors, apart from those mentioned above also Neville Marriner, Claudio Abbado, George Singer, and Charles Dutoit. In one of her most memorable performances she sang in Duo with the renowned Tenor Plácido Domingo and the Israel Philharmonic Orchestra under Zubin Mehta. Weisel-Capsouto was one of the founding members of the New Israel Opera and her major roles there included: Susanna in Le nozze di Figaro, Zerlina in Don Giovanni, Mimi in La bohème, the Governess in Britten’s The turn of the screw, Frasquita in Carmen, and Mrs. Lovett in Sweeney Todd. Weisel-Capsouto often collaborated with fellow Israeli musicians and colleagues in chamber music and recital programs. She appeared frequently at the Cfar Blum Chamber Music Festival and the Israel Festival, and received Omanut La’am’s highest award in recognition of her contribution to musical performances and projects throughout Israel. She taught voice along with her performing career for many years, and today her main occupation is the training of young singers. In addition to teaching at the Jerusalem Academy of Music and Dance, she runs the singing program at the “IRONI Aleph” high school in Tel Aviv, and gives master classes in schools around the country. Many of her former students appear on the Israeli and international concert stage.