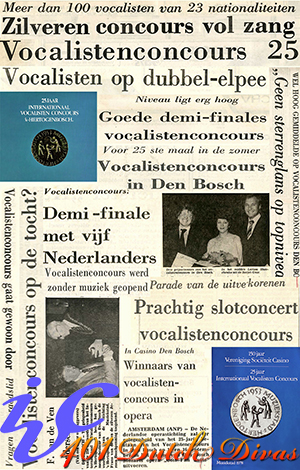 Once the haze that veils the non public preliminary round was cleared, 16 out of 40 sopranos emerged as semi finalists, followed by 10 out of 17 altos/mezzos, 10 out of 18 basses/baritones, 4 out of 9 tenors, and both countertenors. Among the semi finalists were a groundbreaking 6 Dutch vocalists, soprano Tiny Peters, altos Hélène Versloot and Jard van Nes, tenor Ton Hofman, and baritones John Janssen (his second appearance in Den Bosch after winning five Prizes in 1976), and Arthur Schildmeyer.

Zomerdijk thought the level among sopranos and basses/baritones during the semi finals exceptionally high. With respect to the soprano section, especially the Russians and the British sopranos made themselves noticed, which was reflected in the final results. The finalists here were Russians Larissa Shevchenko, Inessa Khotetovskaya, and Alla Ablaberdieva, the Belgian Francine Laurent, the British Elaine Woods and Kathleen Livingstone, and the Polish Malgorzath Armanowska. At this point, Khotetovskaya was still among the favorites, due to what critic Hans C. M. van Rooy dubbed ‘the jurors succumbing to her violent East European attack.’ Reading such intriguing words one becomes intrigued, and curious after the voice…

Indeed, an impressive voice with squilo and bite, and although this unusually dramatic in Schubert’s ‘Ave Maria,’ she still manages to imbue the prayer with genuine emotion and a sweet, innocent effect. Another name to remember was the Italian Martina Musacchio, of whom Karin Maria Kwant wrote in Mens & Melodie that, aged 22, she was perhaps a shade too young to reach further here, although the critic had no doubt that she was a name to remember for the future. Musacchio studied in Geneva, Florence, Bologna and Munich, following which she joined the opera of Zurich in 1981. Regrettably, she did the promising but still overtly young mezzo Lani Poulsen, return to the IVC a few years onwards. Presumably, Musacchio’s First Prize at the As.Li.Co. Competition 1978 started her professional career in Switzerland and Italy. Kwant dubbed her an ‘oratorio soprano,’ which is confirmed by her later recording of Rossini’s Petite Messe Solenelle, but we cherish her mostly as Madama Laura in Cimarosa’s I due baroni di Rocca Azzurra (RAI 1989, CD Bongiovanni), and as Violante in I tre amanti (Mosca, 1990, CD Bongiovanni). In additon, broadcasts recordings exist of her Gianetta in Donizetti’s L’elisire d’amore (Zürich, 1980, with Kathleen Battle and Francisco Araiza), Lisette in Puccini’s La rondine (Monte Carlo 1991, with IVC 1979 winner Nelly Miricioiu), Erste Magd in Richard Strauss’ Daphne (Geneva, 1991, with Lucia Popp), and Adele in Bellini’s Il pirata (Lausanne 1993, with Licia Aliberti).

While Polish tenor finalist Grzegorz Caban needed the Gala Concert to fully convince Zomerdijk, the East-German Christoph Rösel did not get that chance, since the finals were his end station. Zomerdijk thought especially the average level among basses and baritones during the semi finals very high. The Japanese baritones Kawashimo and Imanaka had a sound technique, but they were still singing in a very scholarly manner rather than interpreting the parts they were singing. John Janssen confirmed the fine impression he had made the previous year, but faced steep competition, beginning from the Belgian Henry Haas, who demonstrated great feeling from the theatrical aspects. He matched this with vocal artistry, and both talents blended to perfection in an aria from Orff’s Die Kluge. Hass’ appearance as followed by some excellent Lieder singers from the United Kingdom, and they proved too great an obstacle to take for Arthur Schildmeyer, even though eh sang in a different category. Canadian baritone Ingemar Korjus proved excellent in songs, and Zomerdijk noted that his last name was almost a recommendation in itself (this referred to the famous 1940’s coloratura diva Milza Korjus). With so much to choose from, the critic fro Brabants Dagblad felt compelled to pass over such notable candidates as the Austrian Pailer, and the British singers Richard Lloyd Morgan and Stewart Kershaw. Nonetheless, the latter two made distinct careers. Morgan had an extensive concert career, and appeared among others in recordings of Vaughan-William’s Sir John in love under Richard Hickox, 1997 (with IVC 1961 finalist John Bowen among the cast), and Korngold’s Die Kathrin (CPO). Broadcast recordings include the title role in Rossini’s Il signor Bruschino (Berlin, 1988), and parts in Purcell’s King Arthur (1995 Royal Albert Hall), Wolf-Ferrari’s La vedova scaltra (Wexford 1983), Rigoletto (Brussels 1999), and Henze’s Elegie für Junge Liebende (Berlin).

Among mezzos/altos the critic found less that could please him, even though there were 10 candidates. The Dutch Hélène Versloot still had much to learn in terms of diction. The English Janice Alford (Clothilde in a 1980 vinyl recording of the Norma duet with Mirella Freni and Renata Scotto as Adalgisa and Norma) attracted most attention, with a fine rendition of ‘Dido’s lament.’ This proved too high an obstacle to overcome for the German Ulrike Bänsch-Belician, who made things even more difficult for herself with her choice of 3 songs.

Among countertenors, juror Lode Devos made a distinction between registers, saying that the correct name for this voice type should be ‘Altus,’ and not countertenor, a made-up word introduced by Alfred Deller that tried to link the Altus voice to the more familiar male tenor family. In reality, there were two types of altus voices, one being the baritone or tenor who sang in the falsetto register, with ‘shoulder resonance,’ and the other the boy soprano who continued to sing in the soprano register post register break. Both David James and the Swede Christian Myrup proved worthy of a place in the finals, on the grounds of their well developed sense of style, diction, musicality and vocal intelligence.

Saturday, between 11 and 5.30 PM 3 bass/baritones, 3 altos/mezzos, 2countertenors, 2 tenors, and 7 sopranos (three of them Russian) appeared for the 25 th IVC finals. Hein Zomerdijk gave us an impression of the atmosphere:

‘As ever, spectators flocked the Casino Theatre, which was sold out. The stage was decorated with high green and flowers. The big Steinway piano stood center stage. The excellent accompanists Gérard van Blerk and Rudolf Jansen offered the candidates all possible chances, and even fueled them with sheer inspiration. Sometimes this worked both ways, when the vocal achievements were such that it sparked even higher levels of playing from the accompanists. Some also brought their own accompanists, which had the advantage that the singers felt at ease with them, since they had prepared their pieces long before. On the other hand, these accompanists were not always the most inspiring ones.

Behind tables and seated on comfortable chairs, throned the Jury in the broadened corridor of row nine, presided by Manus Willemsen. Next to staple names as Anton Dermota and Lode Devos sat the most prestigious vocal specialist of our times, Dorothy Dorow, assisted by a corps of former IVC winners.’

Zomerdijk though this choice a fine one in terms of press and public promotion, although he strongly doubted that the organizing committee would ever again construct the Jury in this manner, since their verdicts were far from homogenous. Surprisingly, he thought the final verdicts were largely defendable:

‘It was correct to let less than one third of the 10 mezzos/altos pass from the semi finals to the finals, and it was equally correct not to give any prize in this category, although Jard van Nes did achieve the BUMA Prize for the best interpretation for a Dutch song.’

Jard van Nes’ winning Dutch song was Piet Ketting’s ‘Since I left you,’ from his cycle Three Sonnets. Whereas Karin Maria Kwant in Mens & Melodie thought Van Nes to have been worthy of the Second Prize, Zomerdijk had his doubts. He thought her very much ‘an artist,’ although he was not convinced about the quality of her voice; fortunately for Van Nes, this was one of the rare cases where a singer would later prove Zomerdijk wrong! Finally, Ulrike Bäusch-Belician from the German Democratic Republic received one of the BUMA Foundation Prizes for her interpretation of Jan van Vlijmen’s ‘Drei Morgenstern Lieder.’

Among baritones, the Jury favored Ingmar Korjus, whereas Zomerdijk thought that the Belgian Henry Haas was either very close, or better, neither of which was reflected in the Honorary Diploma that was a warded to Haas. The critic then interpreted the VARA Radio engagement for Haas as a vote in support of his feeling. Whereas the countertenors had ended on a par during the semi finals, the finals showed a clear advantage for David James. Juror Bernard Kruysen on the Swedisch altus Christian Myrup:

‘A competition like this one is murderous at times, both physically and psychologically. Take the 21 years young countertenor Christian Myrup, who has had only three years of formal lessons and who has never before appeared in public. The pressure that such a young artist faces demands the utmost care in terms of judgment.’ (Bernard Kruysen in Hans C. M. van Rooy, ‘Het Vocalistenconcours Den Bosch.’ Unidentified magazine cutting, September 1978).

During the finals, the four tenors failed to live up to the expectations they had raised during the semi finals. Among the four, Gzegorz Caban took the lead with his powerful, operatic voice, whereas Lieder singer Christoph Rösel proved a shade too modest in his performance.

Among sopranos, Russia confirmed the expectations that they had previously raised with their large, impressive voices, which Zomerdijk dubbed ‘important.’ Yet he still thought that the refined artistic performances of the English sopranos Elaine Woods and ate Livingstone was nearly on the same level as the Russian power play. No doubt, the Jury must have had a hard task deciding among these talented singers, and I can imagine that they ultimately succumbed to the clear preference of the audience for Shevchenko, although the younger Alla Ablaberdieva was on a par with her, yet she specialized in Lieder. Had Kathleen Livingstone possessed a volume as Shevchenko and her technical accomplishments, she would certainly have been rewarded with more than just the VARA Prize. Having said that, there was still the question of what to do with the fine Elaine Woods? The Jury decided that with Livingstone having been awarded the VARA Prize, they could make room for two 2nd Prize Winners among sopranos, Woods and Ablaberdieva. What then happened with semi finals favorite Inessa Khotetovskaya, of whom there is no word in Zomerdijk’s article? For the answer one needs to read Hans C.M. van Rooy’s article in an unidentified magazine, which spells that she fell shorts of her capacities due to excessive nerves. Of her later career very little is known, except for a dozen or so song recordings, apparently from a Melodyia vinyl release or a broadcast, the details of which we could not trace. It confirms what the ‘Ave Maria’ above reveals, that she had a formidable, powerful instrument, and as a tribute to all those who suffer from nerves, we gladly provide here another except:

These recordings show that Khotetovskaya must have had a fine career, if it hard to reconstruct it from today’s perspective. Meanwhile, she found her vocation in teaching children the ins and outs of theatrical practice at Deti Rosii (Russian Kids).

The art of the Altus | David James

‘During the finals, James was the sure winner in his category. His program of songs and arias by Purcell, Cavalli, and Händel revealed great expressive means.’