1977 THE PRESS ON THE VOCAL COMPETITION 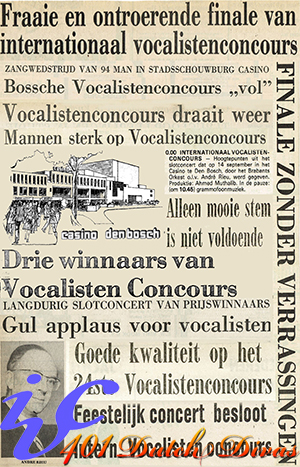 For the Press, the 24th International Vocal Competition (IVC) started when the Jury announced the semi finalists. Among them 17 sopranos, 12 mezzo/altos, 3 tenors and 5 basses/baritones, all minus one unknown to the critics, since they did of course know the only Dutch semi finalist, Joke de Vin, who had previously attracted Hein Zomerdijk’s attention due to her promising vocal accomplishments. If she would make it to the finals was a question of talent versus competition, which led Zomerdijk to write:

‘Only those who can stand the test of great competition may hope to achieve greatness themselves.’ (Hein Zomerdijk, ‘Vocalistenconcours draait weer,’ Brabants Dagblad, September 8, 1977)

Another thing he was looking forward to were the singing sisters from England, Patricia and Doreen O’Neil, indeed an attraction, even if they competed in different vocal categories. Zomerdijk, always balanced and rarely one to succumb to the exterior attractions that young singers competitions inevitably had plenty of, couldn’t help but noticing that if he couldn’t yet tell if the audience would have something to listen to, he could at least assure them that they had plenty to look forward to! In effect, it turned out there was plenty to listen to as well, since both made fine UK careers. Post career, both became active in helping young talent; Patricia has adjudicated at many festivals. She joined the staff of the Academy of Voice in Cardiff in 2011 and is currently involved in producing vocal competitions and concerts at Can You Sing? Sister Doreen is currently Director of Harlequin Agency, which also stimulates talent and manages careers. For those who wonder about the other O’Neills, the sisters are part of a trio with Elizabeth O'Neill, whereas brother Dennis O'Neill is an international tenor celebrity; the late Andrew O'Neill (an Award winning producer) and Sean O'Neill were also active as singers.

When the semi finals started, the females outnumbered the males by far, yet the latter category eventually had the best of the game. Of all 29 sopranos that arrived to Den Bosch, only 4 passed on to the finals. Among mezzos, just five passed to the finals. Zomerdijk lamented that one could have also let oke de Vin pass, who came close. The Jury however judged differently and chose opera divas Corina Circa, Doreen O’Neill, and Susanne Klare along with songbirds Eligia Klosowska and the remarkable Linda Finnie, who ranked among the favorites post the semi finals.

Zomerdijk could not choose between the three fine tenors that had competed in the semi finals, and he failed to see why the American tenor wasn’t let to pass to the finals along with UK tenor Peter Jeffes and Polish tenor Janusz Marciniak. Likewise, he was pleased with what the basses and baritones had to offer. Zomerdijk could follow the elimination of a promising but very young Polish bass in favor of the English bass studying in Italy, William Elvin, his compatriot Graham Titus, and the German Friedemann Kunder, of whom Zomerdijk wrote:

‘The German Friedemann Kunder’s predilection for oratorio was clear from his controlled singing. The curtain call granted to him by the audience made it clear that he was their preferred candidate.’ (Hein Zomerdijk, ‘Mannen sterk,’ Brabants Dagblad, September 10, 1977)

Kunder’s visit to Den Bosch ended in the finals, but as the other finalists, he achieved a fine European career onwards, with winning performances as König Marke, Sarastro, Pimen, Daland, Gremin, Selim in Il Turco in Italia, and hans Sachs and so on, and we present a sample of his artistry here, taken from his website.

The main surprise at the finals was the absence of the Romanian finalist Corina Circa, who was indisposed due to sudden illness. Regardless, Circa achieved a fine operatic career within Romania and Eastern Europe, which is illustrated by this sound sample of her in Adriana Lecouvreur:

Otherwise, the finals brought largely predictable results, wrote Chris de Jong–Stolle, although the order among basses/baritones was reversed, with William Elvin coming out first, and Graham Titus second, due to the fact that he had trouble in the lowest register. Regardless, another critic thought his long spun arches in Brahms so impressive, that for his part he might as well have been awarded the Great Prize of the City ‘s–Hertogenbosch. All critics agreed that Janusz Marciniak deserved his Second Prize in the tenor category, where no First Prize was awarded. Runner up was the English tenor Peter Jeffes, who lost the competition form the Polish tenor because his top notes sounded a little tired in the heath of the moment, although he did some magical things in an aria from Mozart’s Il re pastore. Regardless, Jeffes made a fine international career, singing among others at the Grand Théâtre de Genève. In a broadcast recording from that theatre, we present his voice here in duet with none less a soprano than Edita Gruberova!

On the grounds of the semi finals all predicted an easy victory for Raili Viljakanen, but she fell back during the finals, according to the press ‘presumably because she had decided to travel up and down to East–Berlin before the finals, in order to give a concert there!’ Nonetheless, she still achieved the First Prize in the soprano category, although she may indeed have lost her chance on winning the Great prize of the City of ‘s–Hertogenbosch in Berlin.