1975 THE PRESS ON THE VOCAL COMPETITION 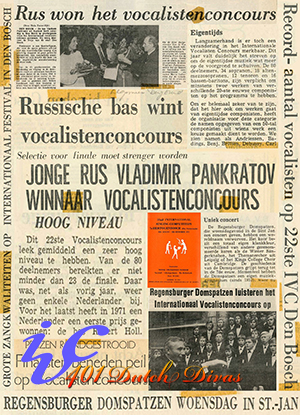 Roel van der Leeuw for Algemeen Dagblad acknowledged the Jury’s initial claim that the 22nd IVC had an exceptionally high level. Except for the reporter of De Volkskrant who apparently wasn’t prepared for a long sit during the finals, all critics agreed with Van der Leeuw – including Leo Riemens.

Leo Riemens actually wrote his first positive IVC review in 17 years, praising nearly all candidates, including those who did not win any prize. Among them Spanish tenor Mario Rodrigo, whom he had wished a Second Prize because of his radiant High C in ‘Salut demeure’ from Gounod’s Faust, and his singing the difficult coloratura passage in in ‘Il mio tesoro’ in one breath! Riemens seemed to have learned a thing or two from Hein Zomerdijk, and now restricted his writings to describing what he observed in a more objective way. Thus we no longer learn about a coloratura soprano who made ‘a complete fool’ of herself, but rather of:

‘An English coloratura soprano was a sure candidate for a prize, until she reached above her talents in Zerbinetta’s hazardous aria from Richard Strauss’ Ariadne auf Naxos. At the end of it she showed signs of fatigue, and then her breath ran out just before the final note.’

In complete contradiction with his usual practice, Riemens didn’t even mention Zerbinetta’s name, which is only revealed to us as Dinah Harris by Hein Zomerdijk.

Riemens further noted that it was a pity to see only three Dutch participants in the public phase of the competition. Van Leeuw for Algemeen Dagblad took this notion one step further when he noted that the limited number of Dutch First Prize winners (Annette de la Bije and Hans Wilbrink in 1954, Elly Ameling in 1956, Maria van Dongen in 1957 and Robert Holl in 1971) did not reflect the international standing that a significant number of Dutch singers, among them a handful of IVC former participants, had secured for themselves. This was the first time that a journalist openly contemplated the possibility that the IVC was ‘too modest’ with respect to Dutch singers (we would say that ‘modest’ is perhaps not the right word here, since the Jury was not foremost Dutch; as written previously on these pages, home candidates indeed seemed to face a challenge that required them to prove themselves beyond the requirements of non Dutch candidates).

Riemens concluded with noticing that the acoustics of both the Jeroen Boschhuis (semi-finals) and the enormous hall of the House of Province were devastating. Regarding the latter hall, he wrote that one might as well ‘have the singers perform out in the open air’:

‘The Hall of Province is the most impossible concert hall known to me in the Netherlands, with seats that are a painful torture in the end.’

Notwithstanding the fact that he had previously expressed his regrets that not Annette Andriessen (indeed, the IVC General Manager since 2008) and Elisa Galema had also been included in the finals, he still complained that the finals lasted far too long, with 23 participants, ‘of which 5 should have been barred from it.’ By common consent, the usual praise was reserved for the house pianists Gérard van Blerk and Rudolf Jansen, in addition to which Russian guest pianist Nelly Tulchinskaya distinguid herself very favorably.

Complaints of the Jury

Oddly, the Jury complained that the large contingent of foreign competitors had given much more effort in order to compete for the Prize of Foundation Dutch Musical Interest, than the Dutch candidates (although we wonder what statistics could be drawn up here, given that there were but three Dutch candidates as off the semi finals.)

Where Riemens was in hurray mood, his usual place as antagonist was taken by a new name among IVC Critics, Hans Hierck for De Volkskrant. Hierck thought the average level at the finals disappointing, and complained about the marathon session of 69 songs and arias from 11 AM to 7 PM. Even if he would be right in this respect, his conclusions would still be besides the point since ‘the average level’ is not what counts most at any given competition. Most important than the speculative impressions of those present there at the moment are the careers achieved by the winners in the future. Thus we can say that with the internationally renowned Patricia Price, Annett Andriessen (who celebrated her La Scala debut in 2013!), the Mexican cult soprano Rosario Andrade, and the Russian bass Vladimir Pankratov perhaps falling a shade short of the standing of his Great Prize of the City of Den Bosch, the 22nd IVC had a fine result. Where Hierck’ sitting flesh apparently was put to the test, Hein Zomerdijk had a great time during the finals. Writing for Ons Brabant, he thought that there was exceptionally much to enjoy among the 23 finalists, even though he acknowledged that this large number of participants required the maximum possible of Jury and audience, since each candidate had about fifteen minutes for his three arias and/ or songs at his or her disposal.