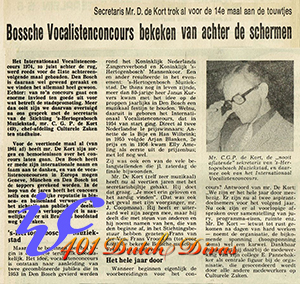 Journalist Noud Verhoeven thought to look back at the 21ST IVC Den Bosch with Secretary C.G.P. de Kort, Chief of Cultural Affairs of the City of den Bosch, who had been active in organizing the IVC on behalf of the City Hall since 1961. From the interview we learn that the organization included Frans van der Ven, Frans Vroons, and until the previous year also Frans van Amelsvoort, the latter two of course having been frequent Jury members from the early beginning onwards.

According to De Kort they are working the year round on organizing the IVC:

‘There are already two aspirant participants who applied. We are already determining the composition of next year’s Jury, the requirements, the locations, and so on. When the competition is on, the stress levels can rise significantly within the organization, but fortunately I have the full time help of Eugène Pannebakker, who also works at the Cultural department of the city.’

When it comes to the function and value of the competition, De Kort believes there are two ways to look at this:

‘There are the participants, who come here hoping to win a Prize that can advance their careers, this much is obvious. In a very simple manner you might say that if enough singers come to Den Bosch, the functioning of the IVC is clear just from those subscriptions. On the other hand you might want to look at the IVC in terms of City promotion. For a city of 85.00 souls, it is amazing to have an event of this impact. We should do whatever we can to reserve it, not just for the City, but also for the entire country, since the IVC is also clearly Holland promotion. Just think of all the contacts it also generates, with radio people, with impresarios, cultural institutes, and so on. That brings countless new offers and opportunities. The finals bring an international press to Den Bosch. Furthermore, there are managements of concert halls and opera houses that attend, there are vocal teachers and of course, a committed audience. I personally know people who have attended all 21 competitions throughout!’

Apart from the evident advantages for winners and City and even the country as such, De Kort admitted that there were also some clear disadvantages with respect to non Winners who had traveled far and invested significant sums of money in traveling to Den Bosch. De Kort:

‘We have been struggling with this. It is a great tragedy to see these people arrive full of hope only to remain empty handed after the first day. We are now trying to do something that at least helps them further, by means of organizing for all of them to have an encounter with the members of the Jury, in order to discuss the ins and outs and to have some advice. I believe there are not many competitions in the world that are this cautious with participants. This personal interest is also reflected in the hospitality of the citizens who host at least one third of all participants with full pension, for free. In addition, we made the Wednesday a free day, during which we will offer the participants a City tour, which is highly valued.’

The latter claim was confirmed by Jury member Arthur Eisen, who graciously old the press that he had ‘tremendously enjoyed he City tour.’ 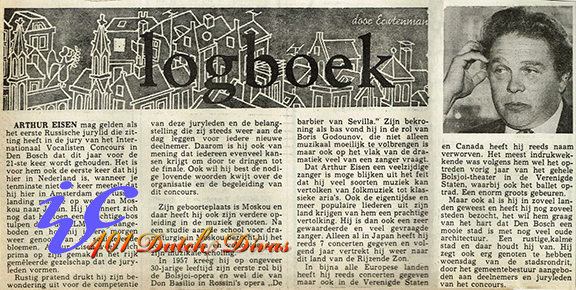