1970 THE PRESS ON THE VOCAL COMPETITION 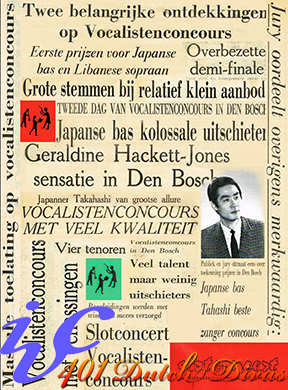 On the threshold of the 1970’s, the press minus Leo Hanekroot (for Brabants Dagblad) seemed to soften it’s often emotionally involved tone of the previous decade. Johan van Dongen for Eindhovens Dagblad gave a realistic summary of the semi-finals, when he wrote that they presented one with much the same picture that any other given semi-finals had brought: much talent of a tender age, in need of a finishing touch, and usually in need of a lot more.

Whereas the 1970 IVC winners sort of speak for themselves, this is perhaps the place to dwell on those who distinguished themselves in the ears of some critics, although they failed to impress the Jury. Such as ‘the exemplary English Lieder singer Louis-Edward Smart,’ and the Polish singer Krzystof Sitarski, both bassos that impressed Johan van Dongen. An unknown critic, writing a more comical essay on the competition titled ‘Hier en Daar’ (Here and There) noted that Smart (which is Dutch means ‘Grieve’) honored his last name in his repertoire, which consisted of ‘O misère,’ ‘Ach weh mir, unglückhaftem Mann,’ and finally ‘O Tod.’

Van Dongen thought Dutch baritone Tom Haenen still in need of further training, but wish for him at least a place in the finals, on the grounds of his performance of an aria from Die Entführung aus dem Serail. The same applied to the Polish baritone Kazimierz Przylubski, who distinguished himself in songs by Ibert and Mozart. With respect to the mezzo sopranos, Van Dongen suggested a new Jury rule, which was to expel mezzos with a vibrato that exceeded the range of a small tertz, which he thought was the case with Olga Sandu and Janet Walker, even though the latter managed to stand her ground in Wolf’s ‘Kennst du das Land’ and Rossini’s ‘Anzoleta Avanti la regatta.’

Dutch soprano Gé Neutel was thought to be still very ‘academic,’ although Van Dongen believed that she had it in her to become a fine Lieder singer one day. Although she did not pass to the finale at this early stage in her development, Neutel achieved a respectable career on the Dutch concert platform as long time member of the Dutch Radio Choir, where she frequently sang solo parts.

Both Van Dongen and Piet Pijnenborg for De Volkskrant agreed that the Jury eventually made the right pick of finalists, even though Pijnenborg stipulated that many of those who didn’t win, would have merited a prize in some previous editions. Highly exceptional, even Leo Hanekroot for Brabants Dagblad agreed with the Jury on all winners, although he strongly disagreed with them not also selecting Austrian soprano Regina Winkelmayer for a Prize. He only agreed with the Jury on not even giving her an Honorary Diploma, since:

‘That would have been a true insult to her considerable talents of this youthful, lyric soprano, who demonstrated a perfect technique, and a completely equalized register from her highest to her lowest notes – including her middle register, often a weak spot in the higher pitched soprano voices. There were moments in Bach’s aria ‘Aus Liebe will mein Heiland sterben’ that made it seem as if a mixed-register in an organ was playing. Combine that with her intense musicianship and her outstanding phrasing, and one heard something that cannot be heard everyday. […] ‘Caro nome’ from Rigoletto was a revelation, a magnificent example of the Italian repertoire in a great German throat. What I regret most, is that the Jury did not motivate their rejection in the same way as they motivated their pick of winners.’

Reading this heartfelt, truly intriguing plea from Hanekroot, readily made me forgive him all his past assaults. In addition, he had a point with his plea for also explaining why this or that finalist wasn’t ready for the challenge yet. Admittedly, singers prefer to hear this in private, but he does have a point. All we can hope for now, is that an IVC Finals recording of Winkelmayer will eventually surface. Just to reassure anyone, who was wondering if Hanekroot grew old and mild, he soon shifted back to his usual collision course, when it came to the election of Christiane Issartel among Prize winners. Paradoxically, his crusade against Issartel makes one just as curious after her voce, as his previous plea for Winkelmayer:

‘Christiane Issartel was in all genres dull and boring, except in La voix humaine , a melodramatic unicum by Jean Cocteau, once set to cheap, sensual and seductive music by Poulenc, for Sarah Bernard. It is merely cabaret plus, and hardly material to compete with at a vocal competition. However, the Jury wholly succumbed to it, just as they did to the sexy soubrette Georgette Sezonov, who turned her part from Die lustigen Weiber from Windsor into a temptation scene of sorts, while she couldn’t possibly hope to make it to the end of that role on stage.’

Since other sopranos were treated to such typical Hanekrootian qualifications as ‘screaming kitchen maid’, ‘dilettante,’ or ‘an angelic sheep,’ I gladly give Piet Pijnenborg the last word here. He praised the decision to let the Jury motivate its choice of winners:

‘In this manner one could still believe whatever he or she wanted to believe, yet it was almost impossible to disagree with the motivations in themselves.’