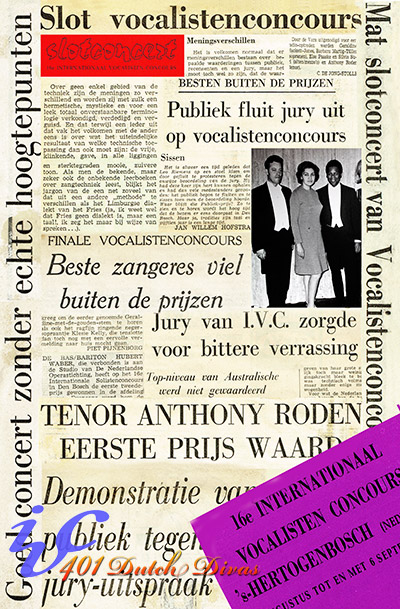 The articles ‘Massive admittance at Vocal Competition’ by Dutch critic C. de Jong-Stolle, and ‘Overloaded semi final’ by Jan Willem Hofstra for De Volkskrant protested against the 39 vocalists that were allowed to pass to the semi finals. This set the tone for a breathtaking clash with the Jury post the likewise ‘overloaded’ finals, where 20 young singers competed.

The Jury motivated this ‘large’ number by stating that the average level of this year’s participants was exceedingly high. C. de Jong–Stolle had his doubts about that though, writing:

‘Having heard al semi finalists, this claim seems rather optimistic. There were some nice voices, but just as many wouldn’t have had a chance in previous years, where the standards were set higher.’

Rather more interesting were the comments of Jan Willem Hofstra, who dismissed the competion as an event that suffered form a ‘teacher’s complex,’ in seeing it’s purpose ‘in encouraging young people to become singers.’ Hofstra then gave his own opinion on what was to determine if one should pursue a singing career or not:

‘Only if you have an exceptional, or extremely beautiful voice, you should be allowed to make a profession of singing. Encouraging those who have just fair or otherwise ‘possible’ voices is a near crime in this ruthless world. In doing so, the Jury created despair, failure, and frustration, for which they are personally accountable.’

For those readers who are not used to Dutch style criticism, we add that Hofstra allowed one exception: if you had a mediocre voice, but an exceptional artistic gift, then you might be able to compensate, and you had his permission to sing. To those who do not know the status of such Dutch critics in the 1960’s, such reviews are probably bewildering, since Hofstra’s line of reasoning would result in closing down all provincial opera houses in the world. Subsequently, anyone who loved classical singing would be forced to visit Milan, Paris, London, Vienna, Berlin, and New York, since the kind of singers that Hofstra allowed, are the ones that usually end up there. Having said that, Hofstra noted that the large number of competitors (apparently he wasn’t aware of the fact that 83 participants had previously been dubbed ‘ a setback’ in a year post the record 101 participants, to the point where some critics foresaw the end of the competition if the numbers continued dwindling…) was not really surprising since it was then hardly possible to land a position without making a name for yourself at one of the many vocal competitions. Indeed, voice contests thrived, and would become the essential hatching places for new talent of the 1970’s and 80’s.

There are parts of Hofstra’s review that are so offensive to individual singers that we simply can’t quote those remarks here. Let it suffice to say that among his ‘victims’ were winner Maria Slătinaru, while his remarks about Negro baritone Walker Wyatt, and Negro soprano Klesie Kelly would doubtlessly bring him before a Court of Law, if his remarks had been written in the USA 2014. Yet, these were different times, Hofstra mostly signaled the fact that European audiences were then fascinated by Negro singers and conductors, merely because they were quite an unusual sight on stage. Such notions need some context though, and one should understand that the Metropolitan Opera had only just decided to take Leontyne Price on tour to the South, regardless fierce protests from within the former slave states. Hofstra could also be an inspired writer with a good sense of humor, which is proven by his conclusive paragraph, where he tips John Bröcheler for the newly installed Prize of the Foundation ‘Dutch Musical Interest’:

‘Bröcheler sang something by Dutch composer Herman Strategier. I tip him for that prize. However, I am but one man, and there can always drop some gorgeous soprano from out of the sky with a perfect rendition of ‘Ik weet het wel, mijn lieve poes, het zonnetje doet je goed (I know, my dear pussycat, the sun becomes you).’ Isn’t that by Dutch composer Catherina van Reness? And if the International Jury would fall to it’s knees for such a soprano, who would blame them? No one, no, the real question here is why there still isn’t a Prize of the Audience in den Bosch?’

Apart from the notion that such a pretty girl eventually did fall from the skies in the shape and grace of Geneviève Perreault, it is indeed a mystery why there were prizes in abundance by 1969, but not one of the audience. And that is only half of the mystery; since it was clear by now that the press craved a place at the table, the harsh disputes could have ended long before, if a Press Prize would have been installed. Crossing that bridge would, however, take some more years of bickering.

For what its worth, we stipulate that out of the 39 semi finalists, a good 30 had fine international or national careers, that can still be traced to date. This is indeed an absolute record number in the history of the IVC to that point. The level of these participants is further highlighted by the fact that many of them left official recordings, including nearly all the Romanian candidates. At this point I once again feel compelled to point out that The World of Singing and The Netherlands are truly worlds apart. Here, on the verge of the 1970’s, I would like to bring into memory the beginnings of the IVC, which had a kick start through the discovery of Annette de la Bije in the first 1954 election. Her subsequent career, and those of Hans Wilbrink, Albert van Haasteren in 1955, and Elly Ameling and Halina Lukomska in 1956 were then considered to have justified the IVC in themselves.

Bar Elly Ameling – a world famous Lieder singer that might not have been received so enthusiastically in 1969, given the heated discussions about Lieder singers and smaller voices in the second half of the 1960’s – there is not a single one of these glorious names of ere that is still known to the 21 st Century public, other than in their own countries. If they rank among the glory of the IVC in its first decade, then what should we make of once world famous stars in their field like Maria Slătinaru, John Bröcheler, and Wolfgang Schöne in 1969. Whereas the likes of Klesie Kelly (three EMI recital records), Barbara Martig-Tüller (likewise the star soprano of a handful of studio recordings), Marina Mirea (a fine Romanian career, whose voce is preserved on a number of Romanian broadcast recordings), Mihaela Maracineanu (another fine Romanian career; her voice is preserved through some Romanian telecasts), Else Paaske (a fine European concert career, with a handful of collectible solo recital discs, among them a 2CD Danacord album devoted to her art), Hanne Stavad (two solo recital discs on the Danacord label), Emil Gherman (star tenor of the Timisoara Opera, and featured on a number of Electrecord discs, among them a solo operatic recital), Franz Lukasovsky (who had a fine local career in the German hemisphere), Karl Markus (harshly attacked by the Dutch press, yet he became a renowned Lieder interpreter, who recorded a number of recital discs), Soto Papulkas (semi-finalist now, winner in 1970, with a fine European career), Axel Reichardt (who recorded Reinhard Keiser’s Passion nach dem Evangelisten Markus), Anthony Roden (who became a truly celebrated lyric tenor), Hans Georg Ahrens (a fine German career, whose voice is preserved on the CPO recording of Schreker’s Christoforus), Josef Baert (whose ‘Schöne Müllerin’ recording is back in print today), Brian Rayner Cook (who had a splendid English career, and recorded Havergal Brian’s ‘The soul of steel’), José de Oliveira Lopes (a celebrated baritone, who appeared as Sciarone with Franco Corelli in a Lisbon Tosca, and made a number of recordings), Hubert Waber (a splendid career in the Netherlands), and Dan Zancu (fine Romanian career; his voice is preserved on a now obscure Electrecord recital disc). Leaving out later international celebrities such as Mariana Nicolesco, Patricia Payne, and Robert Lloyd, most vocalists mentioned above had careers that were in no way less than those of Annette de la Bije, Hans Wilbrink, Albert van Haasteren, or Halina Lukomska, the IVC stars of the early years.