1967 THE PRESS ON THE VOCAL COMPETITION 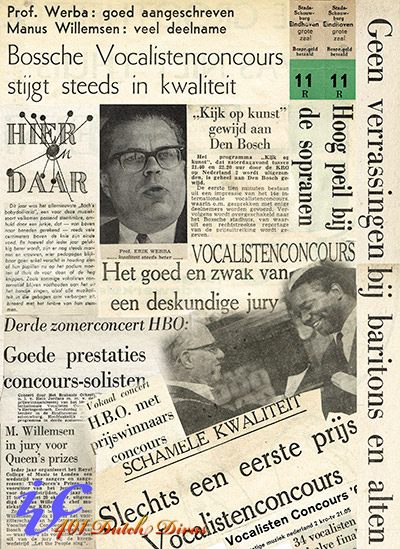 During the semi finals, Johan van Dongen for Brabants Dagblad didn’t have much faith in the tenor section of the 14TH IVC Den Bosch. In particular, he didn’t have mercy on the likes of Heinz Mayer and Jack Irons (1936-2005), although the latter landed a notable provincial career in the UK, where a distinct number of oratoria and recital performances are traceable.

Luckily, a few rare private recordings of Jack Irons' voice have been preserved in the archives of his daugher Cleo, and the collection of his pupil David Turner. We provide here a private recording (with an unidentified pianist) of Irons in 'Questa o quella,' from Verdi's Rigoletto. Post career, Irons became a valued teacher. More samples and info on Irons can be found on his 401DutchDivas page.

English tenor Patrick Costeloe returned for a second attempt, after his Second Prize at the 1964 edition of the IVC, but Van Dongen doubted if the tenor would be able to match his previous achievement. Dutch tenor Bert van Delden from Enschede was judged the best in the tenor section, ‘very musical in a Mozart opera, and an oratorio from Händel, although he forced his voice a little.’ Van Delden’s semi-finals (or finals) rendition of ‘Der Leiermann’ from Schubert’s Der Winterreise was preserved in a broadcast:

Among sopranos, Van Dongen thought things far better than in the other categories. The Peruvian show-lady Olga Gálvez pleased him in Puccini’s La bohème. Claudette LeBlanc-Ross proved not up to the demands of Bach’s St. Matthew’s Passion, but stole the hearts of the audience with a glorious rendition of Mozart’s ‘An Cloë,’ followed by a brilliant execution of an aria from Menotti’s The medium, which positioned her among the favorites for the First Prize among sopranos. Australian soprano Suzanne Green had little beyond her lovely vocal color, while Bulgarian Stefanka Popangelova played her power-soprano card, while singing without much nuance. She was allegedly handicapped by the rough accompaniment of a compatriot. In De Tijd, Leo Hanekroot explained why almost all East-European singers 'chose' to be accompanied by their own ‘horrible’ accompanists, rather than opting for the outstanding IVC accompanists Gérard van Blerk and Georges van Renesse. According to Hanekroot, the reason for this had to be seen in ‘the political circumstance that those governments wanted to have also another sort of ‘accompanyment’ for their singers.’ Thus it seems that many a rudimentary pianist was in fact a secret agent of sorts, preventing the talents of the communist countries from defecting to the West. Notwithstanding those circumstances, Popangelova made the most of Weber’s Freischütz aria, while Bulgarian Melani Rosner merely demonstrated that she still had a lot to learn, wrote Van Dongen. Hanekroot had a diametrically opposed view, and thought Rosner’s elimination:

‘Ongoing proof of the incompetence of the Jury, whose ‘anti bel canto members have once again eliminated the best candidate in the semi finals. Why did the Jury eliminate her? They didn’t tell, but I can tell: Melanie Rosner has a large voice with real quality, which is the first necessity for a bel canto singer. Secondly, she has a firm interest in the notes, and, finally, she sings without effort. That last aspect is precisely what the jury had against her, for this natural giftedness made her incidentally cover a note here and there less completely. I presume they also did not like the sheer rejoice she demonstrated in singing Mahler, and so they gave preference to a semi bel canto singer, Stefanka Popangelova. She was a complete artist, that is true, but I could hear that she had to work for it. She didn’t have that God given joy in singing, but gave us a prefab lesson.’

Nothing further of Rosner has ever come to our attention, but, as has been the case on a number of occasions before, Hanekroot makes one curious after the voice; we still hope to discover her voice in one of the radio broadcasts on the 1967 edition of the IVC.

The surprises among sopranos came from England, starting with Sally Le Sage, whose beautiful timbre impressed both Van Dongen and Hanekroot. Even though her voice wasn’t overtly large, Van Dongen was pleased with her correct rendition of ‘Rejoice greatly,’ from Händel’s The Messsiah. She convinced in Debussy’s ‘L’extase,’ brilliantly accompanied from Georges van Renesse.

According to Van Dongen, Le Sage was eclipsed only by Helen Lawrence, who demonstrated the most beautiful voice of the day, and who was also the most versatile artist with an aria by Bach, an opera aria by Verdi, and a touching Debussy song, ‘Romance.’

Whereas Hanekroot followed the Jury with respect to Le Sage, he couldn’t understand their choice for Claudette LeBlanc. Still on a collision course with the Jury, he finally formulated a clever answer against the defense wall that had been drawn up around the Jury over the years, especially now that the organization had given in to Hanekroot’s previous demands for new blood in the Jury. Certainly, more experts should come up with better answers, but the problem of ‘all juries’ was that:

‘They lack common sense. They are a collective of experts, but collectives aren’t experts. Expertise is an individual quality.’

With that Hanekroot finally managed to give his own opinion a pseudo legitimate edge. At this point I have to make a personal intervention: I wholly agreed with the viewpoint of the press that the Jury in the 1954–1965 period was way too static, and was glad to see the IVC correct this as of 1966. However, given that the names of Johan van Dongen, Leo Hanekroot, and almost all others are likewise with us since 1954, I believe that the readers of any given newspaper are likewise entitled to some fresh blood in terms of journalists…

In the lower echelons in terms of tessitura, American bass Louis Williams reigned undisputed. His large, dark voice impressed Hanekroot, and he was clearly the favorite for the First prize in the Jos Orelio category, even though L. Sch. couldn’t make out the text in his Duparc song, and thought his coloratura in a Judas Maccabeus aria not whole perfect. Runner up in that league was Nigel Wickins, who indeed would reap the Second Prize. Of Josef Loibl we are informed that he posessed a high baritone, but according to critic L. Sch., nerves got the better of him during Richard Strauss’ ‘Allerseelen,’ where he had a black out. Regardless, he made his point in his favorite genre, Lieder