1957 THE PRESS ON THE VOCAL COMPETITION 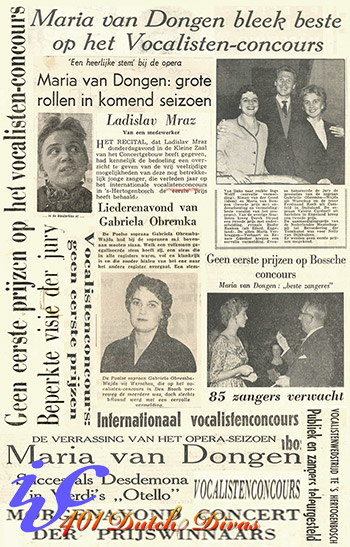 The 4th edition of the IVC had a mixed reception in the press, perhaps even a 'bad' reception. According to Willem Pelemans from Het Laatste Nieuws the competition was a ‘tremendous disappointment for both the audience and the participants’. Summarizing, Pelemans’ concluded that the ambitions of the IVC had become 'unrealistic with respect to what could be expected from aspirant professional singers.' According to him it was a mistake not to award any first prize:

‘Great singers who can fully master the requirements of all three mandatory disciplines opera, oratorio, and art song, certainly have more work than time to spend 8 days in Den Bosch.'

He urged the organization to come to its senses and reformulate the ambitions on a more realistic pane:

‘Given that competing only requires singing three songs, two opera arias and two oratorio arias, it is clearly a contest for young talents who are looking for openings. With respect to the future, the IVC Foundation should help them. This task they have now forfeited by word of the President, who formulated an ambition that is beyond the powers of the competition. On Tuesday and Wednesday some young singers performed who would have deserved a firm encouragement in one or two of the genres they competed in. Instead they were given a cold shower.’

According to Pelemans, the audience was convinced that the Polish soprano Gabriela Obremba-Wajda would win the Aaltje Noordewier-Reddingius Prize and they expected to see her in the final concert. However, her lacking skills in art song and oratorio was judged more important than her very promising talent for opera. She, and the ‘true virtuoso’ Austrian Inge Wolff were just given an honorary diploma.

Whereas often we have a case where time corrects the Jury, the 1957 edition sort of sided with the Jury in this matter. Little has been heard of Wolff and Obremba-Wajda after the IVC participation, whereas Pelemans’ judgment that with Maria van Dongen and Valerie Cardnell the lesser talents were given Second Prizes is evidently wrong. Maria van Dongen had a great career with the Dutch Opera and abroad, whereas Cardnell had a distinctive local career in the UK, where she even recorded a 10” vinyl record with songs.

Pelemans further favored Derek Stroud above Ranken Bushby, and implicitly suggested that Stroud might have been awarded the First Prize in the Jos Orelio category.

In between the lines, the critic also suggested that condoning your competition with 4 First Prizes of ƒ 1000 each and then not awarding a single one felt a bit ‘cheap’, especially since the costs for getting to Den Bosch and living there for foreign participants could easily match the prize money. 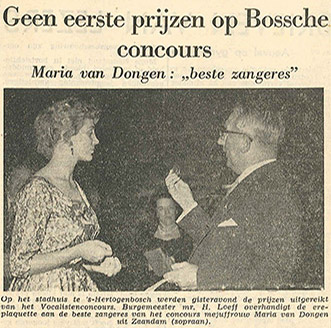 In hindsight, Maria van Dongen, who received outstanding reviews for her operatic performances throughout 1957, might well have been given the First Prize, especially since she was given the Second Prize ‘with distinction’ and awarded Best Singer of the Contest (which onwards counted as the ighest Prize in all, above a mere First Prize – RS). Letting her have the First Prize (and the full prize money) would have significantly contributed to the standing of the competition, at least among young singers. On the other hand, not awarding prizes at random can at times create a certain standing with respect to the level of the competition.

Pelemans’ rebuff regarding the impact of not awarding a single singer the first prize made sense in so far, that it was to be expected that singers would think twice before entering the IVC, especially when they had to travel from afar. Furthermore, advanced singers such as Maria van Dongen, which had been the target of the organization since the previous year, were not exactly encouraged by what in hindsight really seemed a wrong outcome.

If in retrospect the 4th IVC was indeed disappointing because of ill-advised judgments and ambitions, one might still say a word or two in favor of the organization and the jury. Just as the singers, also the organization had to learn from its own mistakes. They themselves were hardly experienced in managing the ongoing challenges of the competition they had created. To their credit it should be said that they always reflected on the criticisms uttered in the press. They were open for suggestions, and their decisions were always made with the interest of the competition on their minds.

Cornelis Basoski in Nieuwe Haagsche Courant suggested that it was time to replace the Dutch jJry members for the next edition, since their ‘tastes’ were now becoming recognizable and it was time for a new impulse. He recommended that an East-European specialist should be included, since clearly the current members did not appreciate the Slavic voices. With respect to the female voices, he further recommended that the jury would be fortified with members who were better able to judge the dramatic qualities of voices, which was now a point neglected. Finally, Basoski recommended that prizes should be awarded per category, and not per voice type:

‘If the competition wants to maintain its ambition level, it will have to divide the vocal categories, fortify the jury and employ another location without sound absorbing curtains and too much heating.’

In defense of the Jury

Basoski’s article in which he nearly crowned Obremba-Wajda as winner of the competition after all can be read in the Winners section. As much as we can now agree that the 4th IVC was not the most successful in terms of organization and aims, we also should say that time answered to Basoski’s final words, which predicted that time would tell the Jury wrong in judging Maria van Dongen above Obremba-Wajda. Alas, onwards little was heard of Obremba-Wajda who is primarily remembered as a painter today, whereas Maria van Dongen had the only major, international career of all 1957 IVC participants.