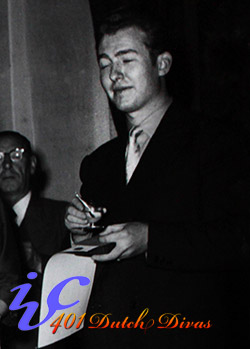 401DutchDivas/401ivca chief editor René Seghers spoke with bass turned baritone Albert van Haasteren about his memories at winning the Second Prize in the bass category during the 1955 IVC contest. Van Haasteren had only been studying singing for two years with Johanna Bollekamp in Rotterdam, when he came in 2nd for the Jos Orelio Prize at the 2nd International Vocal Competition Den Bosch, 1955.

His surprise victory came at a moment that he just had started studying opera in Amsterdam, with Felix Hupka. He then worked as an interior designer, but his interest in opera was profound. He even went as far as to study stage movements by practicing ballet, and fighting: 'Appearance and physical presentation are very important in the theater. They define how you come across to the audience. It was not easy for me though, since initially I had so little money that I couldn't afford a paid for teacher. Fortunately, Miss. Bollekamp said that my voice was too beautiful to be wasted for lack of money alone, and she taught me for free until I could spare some money.'

Despite his limited training, his vocal endowments and appearance at the 2nd IVC impressed jury member and first conductor of both the Amsterdam and the Karlsruhe Opera Houses Alexander Krannhals enough to offer Van Haasteren a contract for the Karslruhe Opera House – on the spot! Van Haasteren first hesitated to accept the offer, since he did not consider himself a professional singer and wanted to talk things through with his wife Lily: 'I had just married and wanted to talk this over with her. There was no way I would have done it if she had any hesitations.

A full career retrospect of Van Haasteren can be found here.