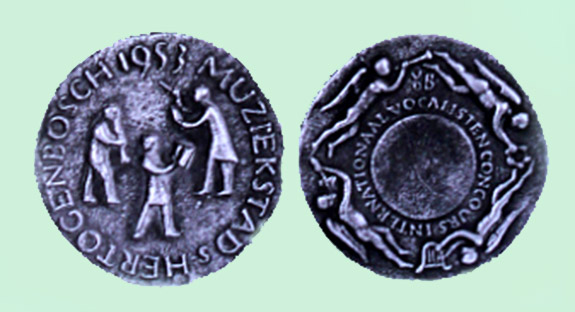 ‘The person who revealed the deepest emotions was the soprano Annette de la Bije. One will not easily forget the way that she sang the 'Incarnatus est,' so truly beautiful, so intimate, so eloquent as her voice sounded here. [ ... ] We were msotly attrackted by the very bright, sensitive and musical soprano Annette de la Bije, who might well develop into one of our greatest singers . She sang the ‘Incarnatus est’ from the Mass in C by Mozart and an aria from Madama Butterfly by Puccini’. [ ... ] The Benelux Vocal Competition in 's Hertogenbosch was won by the youthful soprano Annette de la Bije on Wednesday. Given the competition from Belgium, this may be labeled a great success, which will certainly lead to concerts in the Benelux countries.’ (Newspaper clippings from De la Bije 's scrapbook regarding her IVC 1954 victory)

‘We have delighted in the cristal clear, very melodious and musical soprano Annette de la Bije, who who doubtlessly will become one of our greatest sopranos. She sang the ‘Icarnatus est’ from Mozart’s ‘Mass in C’ and an aria from Puccini’s Madama Butterfly.’ (‘Slotconcert van het Benelux-Vocalistenconcours,’ Unidentified Newspaper cutting, September 27, 1954)

Annette de la Bije (Rotterdam, March 1, 1927 - Germany, March 17, 2014) was a private pupil of Jacoba Dresden-Dhont. She enjoyed a significant career in The Netherlands, mostly as an oratorio singer. Celebrated was her rendering of the soprano part in Bach's St.–Matthew Passion, and Haydn's The Seasons. In opera she appeared as Anna Reich in Nicolai's Die lustigen Weiber von Windsor, as Gretchen in Die Wildschütz, as Marzelline in Fidelio, as Blondchen in Die Entührung aus dem Serail and a handful of other celebrated productions (among them Bizet's Les pêcheurs des perles, Marschner's Hans Heiling, Lortzing's Der Wildschütz, and Verdi's Don Carlo and Oberto). In 1959 she created the soprano part in Henk Bading's electronic television opera Salto Mortale. Halfway the 1960's she started accepting less contracts because she wanted to spend more time with her family, after her two daughters Cornelieke and Francina were born (1961/1963). As an immediate result, her international career in Germany, Switzerland and Austria came to a halt. Only Germany near the Dutch border, Belgium and Paris on hollydays were still within the range of her flat with sea view in Zandvoort. Her merits in Bach's St.–Matthew Passion can be enjoyed in a Phillips 45RPM recording of 'Blute nur du liebes Herz'.

In the wake of the 50 years IVC celebration in September 2014, we interviewed De la Bije exclusively, and worked with her on a full length feature biography at 401DutchDivas.nl. We had advanced to recording the conversations, working out the text and archiving her photographs, but in the middle of sorting out her recorded legacy in terms of radio recordings, she sadly passed away on March 17, 2014. We published De la Bije's recollections of her 1954 IVC Victory on our Reminiscence page. For Annette de la Bije's feature portret and the 40 minutes exclusive interview,including refelections on her IVC Jury memberships in the 1980's, many photographs and mp3's, you can visit her pages on 401DutchDivas.nl 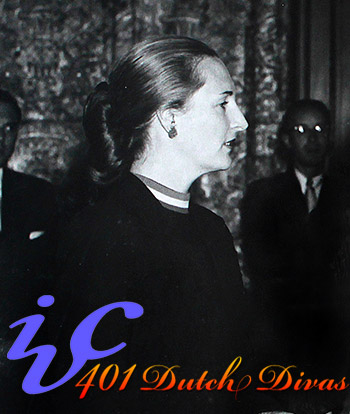 ‘Among finalists I was touched by the beautiful, warm, and very nuanced soprano Aukje Karsemeyer who also proved a most artistic personality.’ (Leo Hanekroot, ‘Vocalistenconcours in Den Bosch,’ Unidentified Newspaper utting, September 1954)

‘Aukje Karsemeyer-de Jong was at an advantage given her extensive experience in performing. Where others still appeared in search fof their natural stage presence, Karsemeyer was wholly at ease before the audience.’ (Piet Pijnenborg, ‘Concert van bekroonde vocalisten,’ Unidentified newspaper clipping, September 27, 1954)

‘Aukje Karsemeyer-de Jong, concluded the pre and post pause parts of the concert and thus had a hard task to live up to her talented colleague soloists. Naturally, she fought for what she was worth. With temperament and rapture she excelled in Agathe’s aria from Der Freischütz. The Prince Igor aria gave her less options to stand out, but with some inborn Hilversum chauvinism we mention here her lyrical sound.’ (‘Prijswinnaarsconcert,’ Gooi & Ommeland, September 27, 1954)

Aukje Karsemeyer-de Jong (Hilversum, March 26, 1921), studied with Aaltje Noordewier-Reddingius. When she participated in the first IVC contest, she already had a career in lighter music with the Dutch Radio broadcasters. She announced to move toward greater goals, but onwards her name continues to appear mostly as a singer of the lighter muse. A Dutch television fragment of 'Reich mir die hand mein leben' from Le nozze di Figaro shows her merits in classical music: 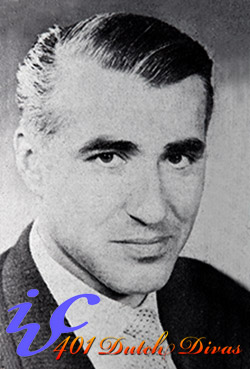 ‘The baritone Frans Meulemans harvested a decided success with Rossini’s famous Figaro aria. Yet his choice before the break, a difficult coloratura aria by Bach, gave him little chance to reveal the legato that was his strong point. Presumably he had better not aimed this high.’ (Piet Pijnenborg, ‘Concert van bekroonde vocalisten,’ Unidentified newspaper clipping, September 27, 1954)

‘A name to be marked is baritone Frans Meulemans, a virtuoso in Bach and Rossini.’ (‘Slotconcert van het Benelux-Vocalistenconcours,’ Unidentified Newspaper cutting, September 27, 1954)

‘The baritone Frans Meulemans caught us by surprise with Bach’s ‘Der zufriedengestelten Aeolus’ and not less so with his ‘Largo al factorum’ from Il barbiere di Siviglia. His is a light weight, radiant and very flexible baritone that might eventually evolve into a lyric tenor.’ (‘Prijswinnaarsconcert,’ Gooi & Ommeland, September 27, 1954)

Belgian baritone Frans Meulemans was born in Wilrijk (BE), on May 7, 1920. He studied with Willem Ravelli at the Antwerp Conservatory, where he was previously awarded the First Prize, graduating with honors.

Frans Meulemans' First Prize at the International Vocal Competition (IVC) 's Hertogenbosch 1954 has always remained a little in the shadows of the careers of Annette de la Bije and Hans Wilbrink, both Dutch singers with whose significant careers the IVC could then make huge promotion within The Netherlands. For lack of biographical and chronological details it is hard to judge the scope of Meulemans' career now, although the little that we know suggests that we should give him due credits in retrospect. His career culminated in a prestigious engagement with the Royal Flemish Opera Antwerp (KVO), where he sang during two seasons, from 1961 to 1963. The only other chronological detail that we currently know of Meulemans, is that he created the title role in Marinus de Jong's opera Esmoreit, at the KVO Antwerp, in September 1970. Other than that, nothing further is known about Meulemans, of which we do present the first ever online photograph here. For more information you may visit our frans Meulemans page on 401DutchDivas.nl. 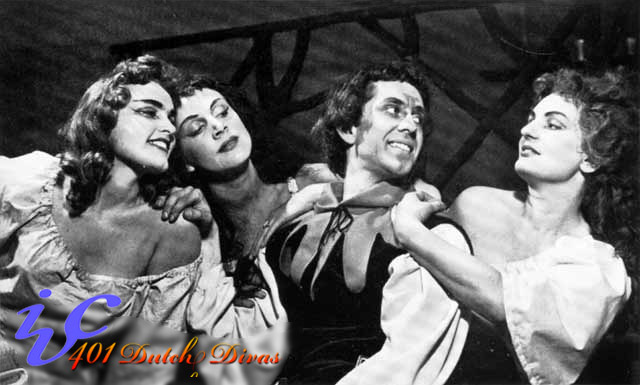 ‘The outstanding light bass voice of Hans Wilbrink was very musical and rounded. Given his very young age it was madness to go on stage alone and perform Boris Godunov’s ‘Death scene,’ although it didn’t hrt his chances in the end. This is a most promising enrichment for the bass ection and all he needs now is to nurture his artistic personality.’ (Leo Hanekroot, ‘Vocalistenconcours in Den Bosch,’ Unidentified Newspaper utting, September 1954)

‘The young baritone Hans Wilbrink was more or less a revelation in Mendelssohn and Verdi. He is a true musician and a singer with a most promising future.’ (‘Slotconcert van het Benelux-Vocalistenconcours,’ Unidentified Newspaper cutting, September 27, 1954)

‘Young Hans Wilbrink from Utrecht will certainly become a bass of European standing. In mendelssohn’s ‘Es ist genug’ but especially in ‘Confutatis meledictus’ from the Verdi Requiem one marveled about his voluminous, warm voice which was used with great musicality.’ (‘Prijswinnaarsconcert,’ Gooi & Ommeland, September 27, 1954)

‘The singer that enchanted us most was Hans Wilbrink, whose voise reminds us of Herman Schey.’ (‘Prijswinnaarsconcert,’ Gooi & Ommeland, September 27, 1954)

Hans Wilbrink enjoyed an international career as a bariton, appearing among others in a celebrated 1969 performance of Benjamin Britten's Peter Grimes, in a cast that included tenor Peter Pears and soprano Stefania Woytowicz. This performance was released on CD in 2000 (CD BBCL 4046-2). Wilbrink's other recordings include Beethoven's 'Symphony Nr. 9' with The Concertgebouw Orchestra under Otto Klemperer, with Gré Brouwenstijn, Annie Hermes, and Ernst Haefliger as co stars (1956/57).

In 1959 he recorded La Passion by George Migot (1891-1976) with The Radio Philharmonic Orchestra of The Netherlands for NCRV Radio (CD Arion ARN 268468). In a 1963 Glyndebourne appearance as Pelleas in Pelleas et Mélisande, he appeared in a tenor or bariton Martin part, precisely as predicted by one of the 1954 critics! (CD Glyndebourne GFOCD 003-63). In 1969, Wilbrink performed the title role in the world premiere of Gunther Bialas's Die Geschichte von Aucassin und Nicolette, of which we offer an excerpt here:

From 1966 up until a few months before his death in 2003, Wilbrink was engaged at the Munich Opera House where he sang comprimario parts with the most famous singers of his generation, such as José Carreras, Plácido Domingo, Julia Varady, Mirella Freni, Giacomo Aragall, and Piero Cappuccilli. His conductors there included Carlos Kleiber, Nello Santi and many more. A full Wilbrink discography can be found on 401DutchDivas.nl by clicking here 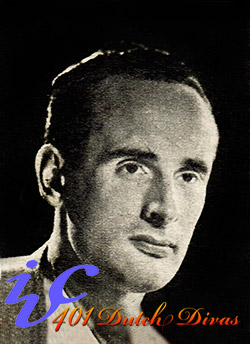 Tenor Timo Jacobs was born in Hilversum on March 16, 1924. He studied at the Lyceum for Music in Amsterdam and with Eva Liebenberg in Hilversum. His was a well trained, lytical tenor voice. He was a renowned Mozart interpreter. Initially he was a regular performer with the Dutch Radio Orchestra, thus appearing in numerous broadcasts. From 1955 onwards, he was engaged as the Opera House of Essen, Germany. Presumably, his IVC victory that landed him this contract (newspapers of the time also mentioned the Krefeld Opera as the theater where he was expected to be engaged).

Nothing further is known to us of Dutch tenor Timo Jacobs. Should you have additional info, photos and/or recordings with this Belgian soprano, you are welcome to contact us atThis email address is being protected from spambots. You need JavaScript enabled to view it.

‘Surprises are nearly always an integral element in such competitions as this one, and the audience usually disagrees with the Jury at one point or another. Even so, we do not believe it is necessary to harshly attack the Jury, which would be unkind. It must have been the elusive ‘form of the moment’ that made Second Prize winner Henriëtte Willems rise high above her higher ranked comeptitiors during the concluding Gala Concert. An exceptionally warm, mezzo-like soprano, brimming with resonance and sound, and very intense. On top of that she is a hot blooded dramatic talent with unusual spontaneity, which resulted in her throwing herself in the arms of Hein Jordans in gratitude for his accompaniment.’ (Piet Pijnenborg, ‘Concert van bekroonde vocalisten,’ Unidentified newspaper clipping, September 27, 1954)

Belgian soprano from Henriëtte Willems from the city of Luik, came in second among sopranos at the 1954 Benelux Vocal Competition (IVC). At the final Gala Concert on September 26, 1954, in the Casino Theatre Den Bosch, she emerged as the audience's favorite performer. Her natural charm is obvious from the quote above that describes her communicative talents in terms of blowing hand kisses to the audience. In balancing charm, technique and talent the critic of De Tijd thought her timbre interesting, although it sometimes failed her (we presume he meant that she couldn't keep her vocal color in all registers or at all times). Her dramatic impetus was evident, but her singing was not yet very subtle. One thing was clear though:

'In terms of allure she easily outclassed all her competitors.’ (‘Concert met Prijswinnaars,’ De Tijd, September 27, 1954)

Nothing further is known to us of Belgian soprano Henriëtte Willems. Should you have additional info, photos and/or recordings with this Belgian soprano, you are welcome to contact us at This email address is being protected from spambots. You need JavaScript enabled to view it.
back to top